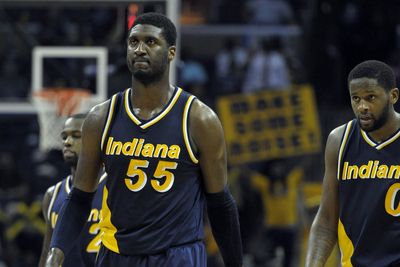 The Lakers are finalizing a deal to acquire the veteran big man from Indiana.

The Los Angeles Lakers bypassed a center of the future when they decided to take guard D’Angelo Russell over Duke big man Jahlil Okafor with the No. 2 pick in the NBA draft. That choice left the Lakers with a hole in the middle, but L.A. has reportedly targeted a player to fill it.

The Lakers are finalizing a trade for Pacers center Roy Hibbert, according to Marc Stein of ESPN and Adrian Wojnarowski of Yahoo Sports. Los Angeles has enough cap space to completely absorb Hibbert’s $15.5 million deal and the Lakers are attempting to do just that, according to Stein.

The Pacers will likely receive some combination of second-round draft pick(s), cash and/or rights to foreign players, per Jeff Zillgitt of USA Today and Wojnarowski.

Hibbert could have become a free agent this summer, but chose to opt in to the final year of his contract with Indiana. The Pacers have talked about playing faster next season and they drafted Texas center Myles Turner with the No. 11 pick. The door appears to be open for Hibbert’s exit, and L.A. has the money to make a potential trade work.

LatinoAthlete Staff - August 15, 2015
0
Keep your hands to yourself, guys. What's the best way to steal someone's thunder after they get a base hit? Miggy knows! That's...