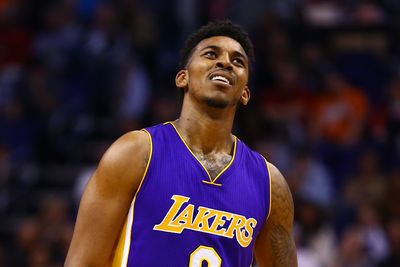 Swaggy P’s time in L.A. may be coming to an end.

Los Angeles Lakers guard Nick Young is a “strong candidate to be unloaded” as the team seeks to clear salary cap space, according to Adrian Wojnarowski of Yahoo! Sports. With the pending trade for Indiana Pacers center Roy Hibbert and expected free agent deals with Lou Williams and Brandon Bass, Young appears a likely roster casualty in an active offseason for L.A.

The Lakers went into this summer hoping to land a big-name star but have turned to alternatives after falling short in pursuit of LaMarcus Aldridge and others. The team plans to acquire Hibbert and his $15 million salary, which the Pacers are hoping to dump on Los Angeles as they seek to go small next season, as well as some mid-tier free agents. Williams has also reportedly signed for three years and $21 million, while Bass will likely get a reasonably sized multi-year deal as well.

Those additions not only add a lot of money to the Lakers’ books, but leave the team with a fairly crowded backcourt entering next season. Kobe Bryant will be healthy, No. 2 pick D’Angelo Russell should play a significant role from Day 1, Williams is the reigning Sixth Man of the Year and Jordan Clarkson is coming off a solid rookie season. There’s not much room for Swaggy P with those four filling the depth chart, and a trade would clear the $16.3 million he’s owed through the 2017-18 season.

Young, 30, averaged 13.4 points and 2.3 rebounds in 42 games with the Lakers last season. He missed time due to a knee injury and hasn’t played more than 64 games in a season since 2009-10. One of the game’s streakiest shooters and scorers, he shot better on three-pointers (36.9 percent) than two-pointers (36.3) last season. It’s the first time he’s shot below 40 percent from the floor in his career, but he’s known more for his big scoring outbursts than consistency.

A native of Los Angeles, Young has clearly enjoyed his time with his hometown team even as they’ve struggled on the court. It appears the numbers game may lead to his departure this summer, however. Young has also played for the Washington Wizards, Los Angeles Clippers and Philadelphia 76ers in his eight-year career.

Darren McFadden will likely start at RB for Cowboys in Week...

LatinoAthlete Staff - September 9, 2015
0
Despite being listed at third on the depth chart, Darren McFadden is the probable starting running back for the Cowboys. The heir...