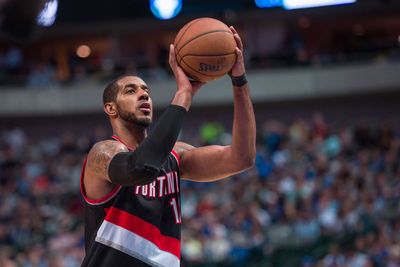 Aldridge will meet with them again despite reportedly being underwhelmed by their initial presentation.

Despite falling flat in their first meeting, the Los Angeles Lakers will have a chance to sit down with LaMarcus Aldridge for a second time, according to Yahoo! Sports’ Adrian Wojnarowski. The Lakers’ hope is that they can “get it right” after reportedly failing to impress the marquee free agent in their first attempt.

General manager Mitch Kupchak and coach Byron Scott will be the only Lakers representatives attending the meeting, according to NBA.com’s David Aldridge. The focus will be on basketball only, which makes sense because Aldridge reportedly felt the first meeting was too focused on non-basketball items.

LaMarcus Aldridge has concluded his initial list of meetings and will now circle back and even visit some of the teams pursuing him, Wojnarowski reports. Aldridge was holding his meetings in Los Angeles, where his agency, Wasserman Media Group, is located. The Lakers, Spurs, Suns, Raptors and Mavericks were among those that sat down with him. Miami Heat president Pat Riley will meet with LaMarcus, according to NBA.com’s Aldridge. The Heat would need to move a lot of salary to sign him.

The Lakers were the first to meet with Aldridge, but he was reportedly unimpressed by their focus on off-court activities rather than the actual basketball team. There were reports that he ruled out the Lakers entirely, though Wasserman denied that. Kobe Bryant’s presence at the meeting was also reportedly a turn-off.

In fairness, the Lakers have been a bad team for two years, as opposed to San Antonio and even Phoenix. Their appeal is less the team and more the market.

That said, it appears L.A. will try a different approach that centers around young talent like D’Angelo Russell, Jordan Clarkson and Julius Randle.