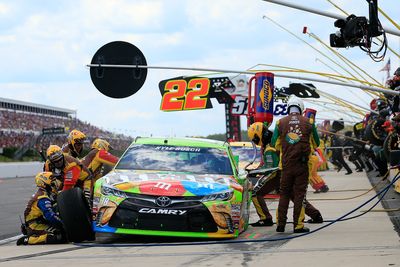 Kyle Busch ran out of fuel while leading on the final lap of Sunday’s NASCAR race, snapping his three-race winning streak.

Another half a lap and a splash of fuel was all Kyle Busch needed to extend his winning streak to four consecutive races Sunday at Pocono Raceway.

But Busch’s fantastic run ended when the fuel tank on his No. 18 car ran dry on the final lap of the Windows 10 400. As he sped underneath the white flag, Busch began weaving excessively, trying to scrounge up some gas for one more lap around the 2.5-mile track.

The effort was futile. Busch’s car slowed dramatically off Turn 2, allowing Joe Gibbs Racing teammate Matt Kenseth to pass him for the lead. Kenseth went on to win, while Busch crept along before ultimately coming to stop on the front-stretch just short of pit road.

NASCAR scored Busch 21st, his worst result in the past six races, four of which he’s won.

“I didn’t know we were that close,” Busch said. “I wish that maybe I had a little bit better heads up, but I can’t fault these guys for trying and going for broke. We’re in the position we’re in for a reason and that’s because of fast racecars and today we probably could’ve made a few different choices there through the last run and made it and won this thing again but that just wasn’t to be.”

Busch had one of the better cars Sunday, consistently running near the front. Strategy and a driver’s ability to squeeze their fuel consumption to the limit — and in some cases beyond — proved to be the deciding factors, however.

On Numerous occasions Joey Logano and Busch, who were positioned 1-2, were urged by their respective teams to conserve fuel. Busch said he didn’t realize he was that close to running out, otherwise he would’ve saved more.

Logano didn’t even make it as far as Busch, running out of gas three laps shy of the finish. That handed the lead to Busch, who then slowed way down in a desperate attempt to score the win. But it wasn’t enough. Also needing to stop was Martin Truex Jr., who had been in third, while Kenseth went the distance.

Had Busch won, he would’ve become the first Cup Series driver since Jimmie Johnson in 2007 to win four races in a row and the ninth in NASCAR’s modern era (1972 to present) to do so.

“If we were one lap short of making it, then I probably needed to save or do a better job of running those last 30 laps or so,” Busch said. “They kept telling me to save, save my stuff just in case we had yellow and had to race but I didn’t know we were going to be short on fuel. Once (Logano) ran out to try to save fuel on those last 3 laps, it just wasn’t going to happen.

“We were short. But we went down swinging so I can’t fault my guys for that. An awesome call, they called the race right and another can of gas and we’d be winning another one.”

Busch missed 11 races to start the season recuperating from a broken right leg and left foot sustained in a February crash at Daytona International Speedway.

Upon his return, NASCAR stated Busch needed to win a race — a requirement he’s fulfilled four times already — and finish 30th or better in the regular season standings to earn a Chase for the Sprint Cup berth.

For much of Sunday, Busch appeared set to move inside the top-30 cutoff. But by finishing 21st, he remains 13 points behind 30th-ranked David Gilliland with five regular season races to go.

“Ah, we’re fine,” said Busch, who trimmed 10 points off his deficit. “If I would’ve won today we’d be in and celebrating a win and a Chase berth.

“We got greedy. I don’t know how greedy, but that’s the position we’re in. If it came down to other things and we haven’t had the success that we’ve had here lately, we would’ve had to have pitted and just made the best finish that we could. But, we went for broke today and come up a little bit short so can’t fault the team.”

A first look at the 5-star basketball recruits in the class...