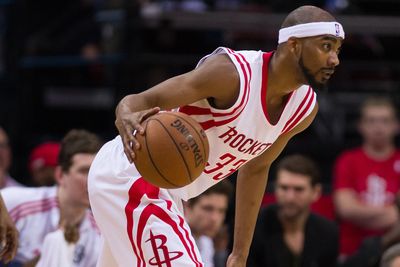 The Knicks seem to be looking to add some athleticism to their roster.

The Knicks have made it a priority to sign forwards Corey Brewer and Derrick Williams, reports Yahoo Sports’ Adrian Wojnarowski.

After striking out on Greg Monroe and securing the services of one of DeAndre Jordan or Robin Lopez, the Knicks are looking to round out their roster and are targeting two athletic, versatile players in Corey Brewer and Derrick Williams. Those are not the big names Knicks fans were hoping for at the beginning of free agency but would make good additions for a team that has decided to build slowly.

Brewer spent most of last season with the Rockets after being traded by the Timberwolves and thrived on their fast pace system. He averaged 12 points and over three rebounds on 25 minutes off the bench in Houston and was a key rotation piece on a team that reached the conference finals. He’s known for his athleticism and ability to score in transition as well as for being a solid defender but a very poor outside shooter.

Williams was the second overall pick of the 2011 draft but never found his place in the league. A tweener forward without a reliable jumper, he found himself behind Kevin Love in the rotation in Minnesota before being traded to the Kings. He never showed the potential that made him a coveted prospect but improved in the last two months of the season under George Karl and at 24 years of age, he could still become a solid role player.

It’s curious that the Knicks, who played at the third-slowest pace in the league last season and struggled from beyond the arc, are targeting two forwards that excel in transition and lack reliable three-point shots. It could be a sign that they are planning to run more or simply an attempt to get more athleticism and positional flexibility in their roster. For the right price, both players are worth the gamble.

LatinoAthlete Staff - June 15, 2015
0
Norway will be hoping to leapfrog Germany with a win over the Ivory Coast in their final group game. We've already reached the...