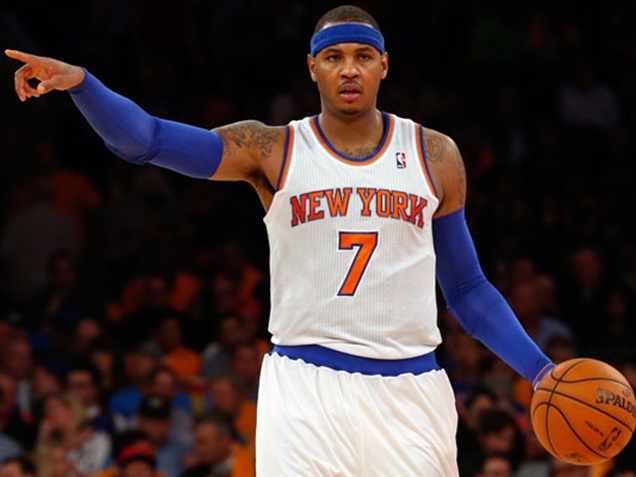 The New York Knick just had their weakest performance of the season on Monday losing 115 – 103 to the Orlando Magic. Is Carmelo Anthony the answer?

Knicks coach Jeff Hornacek said it’s time his team muscle puts some “D” in the game and stop being a disgrace! Read more on The Knicks becoming the WORST team in the NBA when it comes to defense…

It’s time that The Knicks STOP looking weak and pathetic for the 2016/17 NBA season. This was the weakest of performances, and after the 115-103 Magic victory was in the books Monday night, coach Jeff Hornacek said it’s time his team muscle up to the challenge that it faces.

After all, weak and pathetic is no way to go through an NBA season. On Monday Hornacek admitted perhaps this roster is “not capable’’ of playing better defense. It’s a sad assessment but sometimes the truth hurts.

“I don’t think our guys aren’t trying — maybe they’re not capable. I don’t know. That’s what we have to figure out. Maybe play some other guys and mix the lineup somehow. We have to find someone to play some defense. You can’t come out at the beginning and their first three baskets are 3s. You have to have better pride than that. … I think they’re trying — they must not be good enough defensively.”

“There are times we just didn’t go after the ball hard enough. There were some rebounds out there where they just took out of our hands or came over our backs. Maybe we need to get in the weight room a little bit more.”

During Monday’s game The Magic came and put Phil Jackson’s soft bodied team to rest, burying the Knicks, with a 3-point barrage, hitting 15-of-31.

“We have to find somebody to play some defense.”

The Knicks defense ranks sixth-worst in the NBA, so how will this FLAWED team come back from the dead?

The worst player was Carmelo Anthony’s atrocious performance missing 11-of-17 shots. The Knicks had no “D” during the game. They stood frozen as the Magic ran circles around them. Carmelo Anthony demonstrated and his teammates showed that none of them had no clue was defense means. Melo NEEDS to improve his performance!

“You can’t come out at the beginning of the game and give up the first three baskets as 3-pointers. We have to have better pride than that.”

Have the New York Knicks lost their pride?

the Knicks have dropped to 16-18 as the Magic improved to 16-20. This puts the Knicks in their continual downward spiral facing seven straight teams under .500. Have the Knicks forgot that the team teamwork?

Coach Hornacek noted that the Knicks don’t play the team game, and that is the problem. The NBA is a team sport NOT a one-man sport. Furthermore, a disappointed and angry Hornacek said:

“We weren’t [showing] enough fight to even allow them to take the shots.”

Although, he recognized the saddest point about all his players:

“I think they’re trying, we just must not be good enough defensively.”

Therefore, coach Jeff Hornacek feels the only way to resolve the situation is to do something gimmicky. He concluded:

LatinoAthlete Staff - August 2, 2015
0
No injuries were reported in the savage crash. A scary crash had a car slam into the inside pit road wall sending debris...