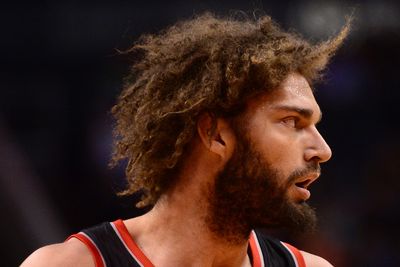 The Knicks couldn’t get their primary targets but signed a quality big man.

Free agent center Robin Lopez and the New York Knicks are finalizing a deal that will pay the former Trail Blazers center $54 million over four year, reports Yahoo Sports’ Adrian Wojnarowski. The Knicks were holding out for a chance to sign DeAndre Jordan but when it became clear that wasn’t going to happen, they focused their efforts on securing Lopez .

Lopez was originally expected to stay in Portland, saying after the season, “I would love to come back. I’m very open to coming back.” However, after LaMarcus Aldridge made it clear he was leaving, the plan changed and the Trail Blazers decided to let Lopez go, too, in order to chase a younger replacement.

Heading into his eighth year, Lopez has developed into a great defensive big man. He’s not at the talent level of his twin brother, Brook, but Lopez is a very serviceable body down low, who can alter a game defensively while hitting the close-range shots that he’s expected to.

The 7-footer had a solid 2014-15 season, averaging 9.6 points, 6.7 rebounds and 1.6 blocks in 27.8 minutes per game while providing a steadying defensive presence. Sadly for the Trail Blazers, Lopez had to miss 23 games with a fractured wrist. He wasn’t as effective after the injury, which coincided with Portland’s slide in the final stretch of the season and in the first-round playoff loss against the Grizzlies.

Lopez was not the Knicks’ first choice in free agency after missing out on Greg Monroe, but he could prove to be a great fit. New York needs all the help it can get on defense and Lopez is a very capable anchor on that end, blocking shots at a nice rate while also more than holding his own in the low block.

On offense he lacks the post game Phil Jackson was looking for on a big man, but Lopez’s offensive rebounding and ability to finish inside well without demanding touches will make him a good complement to Carmelo Anthony. As far as backup plans go, the Knicks could have done much worse than Lopez.

Patience pays off as Australia record 2-0 win over Nigeria

LatinoAthlete Staff - June 13, 2015
0
Australia were made to work for their win, but ultimately had too much for their opponents. Australia bounced back from a World Cup-opening...