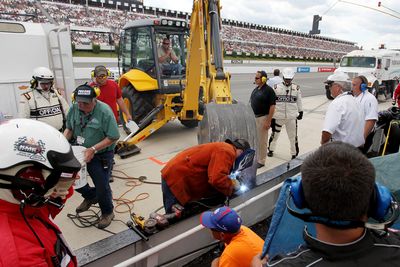 No injuries were reported in the savage crash.

A scary crash had a car slam into the inside pit road wall sending debris flying into a spectator area during Sunday’s NASCAR race at Pocono Raceway.

The incident saw Kasey Kahne get loose exiting Turn 3 and spin toward the entrance of pit road. While he attempted to recover, Kahne could never regain control and smashed into the concrete wall separating crew members from pit road. The impact had such force helmets stationed on the wall were launched through the air with pieces of Kahne’s car becoming lodged into the concrete.

Neither Kahne nor any spectators or team personnel were injured in the Lap 6 accident. NASCAR red stopped the Windows 10 400 approximately 10 minutes to allow track workers to fix the wall.

“I saw the people and I was like, ‘Man you better take off running, get out of the way,'” Kahne told NBC Sports Network. “I haven’t done anything like that before. That was kind of crazy the way it all it happened.”