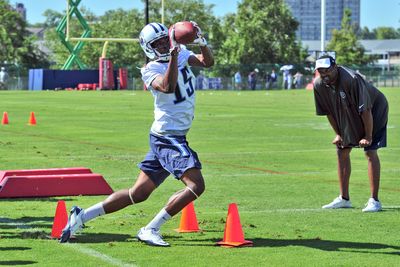 Justin Hunter has had a disappointing two seasons in the league, but he’s been improving in practice. We break down the fantasy implications.

Tennessee Titans wide receiver Justin Hunter is entering a make-or-break season. The 2013 second-round pick has been a huge disappointment so far, but coaches have been talking him up in training camp. On Monday, head coach Ken Whisenhunt gave more praise to Hunter, saying that he’s “trending up” and wants to see that progress carry over to live game action.

Hunter has great physical tools, but the mental game has eluded him thus far. Through two seasons, he has just 46 catches for 852 yards and seven touchdowns. He also got into some off-field trouble this offseason, getting arrested and charged with assault after a bar fight. Hunter is fully participating in camp while the league monitors the case.

Fantasy impact: The fantasy community has been burned by Hunter preseason hype before, so we’ll naturally take this with a grain of salt. He worked with the second team in Tennessee’s preseason opener, behind Kendall Wright, Hakeem Nicks and Harry Douglas. Hunter still has a long way to go to climb the depth chart and earn fantasy owners’ trust, but a strong preseason would be a nice start. He’s worth stashing on Dynasty league benches, but his 2015 stock isn’t looking too hot right now. Re-draft owners should stay hands-off for now.

Can you spot which ridiculous NASCAR race names are fake?

LatinoAthlete Staff - August 10, 2015
0
The Cheez-It 355 at Watkins Glen International is well under way this Sunday. A race named after our favorite cheese cracker product...