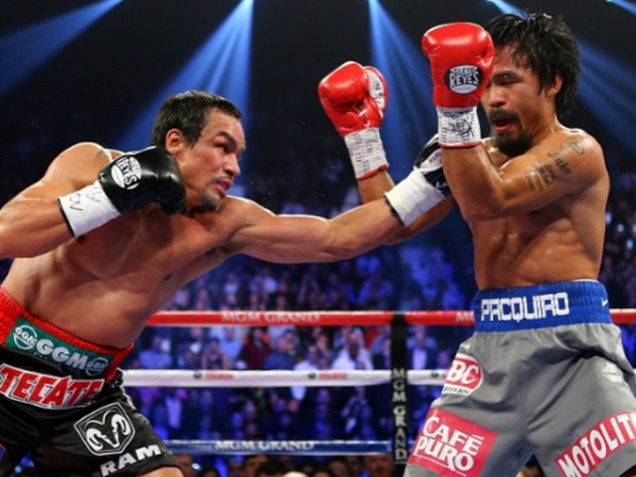 The soon to be 44-years-old MMA fighter Juan Manuel Marquez is ready to come back into the ring after we last saw him win over Mike Alvarado in 2014. Read on…

LatinoAthlete.com has learned that Juan Manuel Marquez (56-7-1, 40 KOs) has his eye set on WBO welterweight champion Jeff Horn (17-0-1, 11 KOs). He wants to fight him in December to end out the year with a hopeful win.

Juan Manuel Marquez is planning for a comeback next month in August against a opponent still yet to be determined. If he wins that fight, then Marquez has two men on his radar to fight. He either wants Jeff Horn or possibly Miguel Cotto in December.

These days, a fight against Horn will be the money making ticket since he is the new money man for the welterweight division. You can thank the intense interest in boxing in Australia, which can equal a big payday at welterweight, making Horn the man to fight.

When it comes to being an E ticket attraction, it’s Horn. There is no one in the welterweight division that can bring in the boxing fans like Horn and Marquez knows that. Pacquiao or Floyd Mayweather are the past, the future is Horn at 147 lbs.

“Pacquiao failed himself (in the loss to Horn), I think he is very involved in his political career and wasn’t training as he should have been. Marquez has all of the right faculties. Against Horn, the right technique would be imposed. I’ve been watching [Marquez train] and he’s been looking super good.”

This could be an interesting fight since Horn is 5’9” and Marquez 5’7” and 14 years older than Jeff. We will see how this plays out.

MMA May Be Less Risky to the Brain Than Boxing, but...

LatinoAthlete Staff - September 10, 2015
0
You can hold off on that sigh of relief. A headline from earlier this summer may initially have seemed to provide comfort to the MMA...