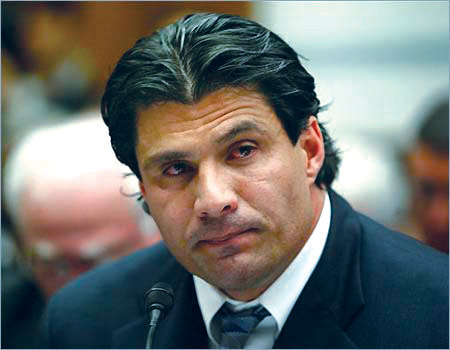 Canseco, 48, who went public about the investigation May 22 with postings on Twitter, told the Associated Press he was victimized by the allegation, and he wants to sue his accuser.

“She alleged I drugged her and raped her,” Canseco said in a telephone interview. “It was an outright lie. I proved it by taking two lie detector tests. I am the victim here.”

Canseco drew intense criticism for posting the woman’s name and workplace May 22. Some of the information was later removed, but Canseco told AP he didn’t regret posting it.

“If you have nothing to hide, why hide it?” he said.

Canseco said Friday that he took and passed polygraph tests in Dallas and Las Vegas to show he was telling the truth.

He admitted in a 2005 tell-all book, Juiced: Wild Times, Rampant ‘Roids, Smash Hits, and How Baseball Got Big, that he used performance-enhancing steroids.

Canseco went through Chapter 7 bankruptcy liquidation last year in Las Vegas. He listed a post office box as his address at the time and reported less than $21,000 in assets and almost $1.7 million in liabilities, including more than $500,000 owed to the Internal Revenue Service.

In recent years, Canseco has played for various teams in California, Arizona, Mexico and Canada.

The day of his Twitter posts last month, he flew to Texas to play several games with the Fort Worth Cats, an unaffiliated baseball team in the independent United League.

LatinoAthlete Staff - June 26, 2015
0
What happens when a Dragon and a Soldier of God meet in an Octagon? We'll find out on Saturday night from Hollywood, Florida when Lyoto...