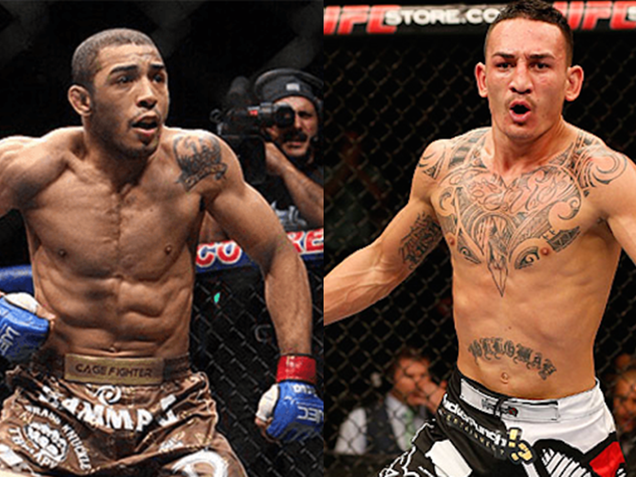 Jose Aldo, who is gearing up for a featherweight title unification bout against Max Holloway at UFC 212 weighs in why a rematch against Conor McGregor will never happen!

If you recall, Jose Aldo lasted only 13-seconds against Conor McGregor at UFC 194 before getting knocked out. McGregor “relinquished” his belt and currently possesses the lightweight strap. As for, a rematch, well that isn’t looking so good for Aldo. Read on…

While speaking at the UFC 212 media conference call on Thursday, Jose Aldo has accepted his grismal loss and is moving on with the reality that he has no chance of ever fighting Conor McGregor again.

Aldo had this to say:

“Everybody still asks me if I want or if I don’t want (to fight him again). That’s not up to me. That’s up to the UFC, and we know it will never happen. I don’t even know if he will come back to fight. The UFC tried to do a (second) fight and he didn’t want it, didn’t accept it, because what happened will never happen again.”

“I couldn’t care less what Conor does or doesn’t do. I’m a UFC fighter and I’m the best featherweight. I have to focus on training and evolving to defend my belt.”

His new outlook is a far cry from what he said last November when he wanted to move up to lightweight and rematch McGregor. It appears the reality of it all had sunk in for Jose Aldo.

The Brazilian mixed martial artist said he once had aspirations to be a boxer, but these days his focus is all about Holloway, who won the interim title by stopping Anthony Pettis at UFC 206.

“I think Max is a big challenge, an opponent that I already expected to face in the future. I try to look at every up-and-comer. I’m a reference (point), I’m a target. Everybody wants the champion, so I try to study every young athlete that enters the division.

“It’s another test for me. He’s a young guy, hungry to win. He’s another one who will try and fail. That’s for sure.”

LatinoAthlete Staff - June 15, 2015
0
Germany should book their place in the WWC knockout stages with a win in their final group game. Germany play the last of...