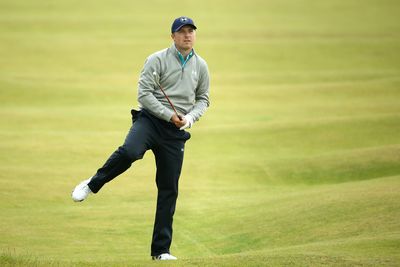 After an awful double bogey on a par-3, Spieth is now three shots back and facing the toughest stretch of the course.

Monday at The Open has been a manic round of birdies and constant leaderboard shuffling, but the primary story has been how Jordan Spieth’s bid to take the first three legs of the Grand Slam remained in tact. Spieth joined the lead just one hole into his round and spent most of the front nine hovering right around the top of the board either on the lead or a shot off the pace.

But with a clustered group and birdies dropping everywhere, a bogey would be extra costly. Spieth did worse, making a double bogey on the par-3 eighth hole. He hit a bad tee shot, which he joked was so far away that it was at the wrong pin on one of these shared greens at the Old Course.

With a mile-long first putt, Spieth was just trying to lag it close and make a two-putt par. Instead, he blasted it through the green and down the hill on the back of the putting surface. He’d need three more strokes from there to get in the hole, dropping to 12-under for the Championship. After the final tap-in, Spieth picked up his ball and chucked it angrily into the crowd. He’s now three shots off the lead of Zach Johnson and Adam Scott, and in a tie for seventh place with 10 holes to play.

On Sunday, an ugly and inexcusable bogey at the ninth hole is what triggered Spieth’s comeback to the top of the leaderboard. He made three straight birdies after it. He’ll need a comparable run now on Monday.