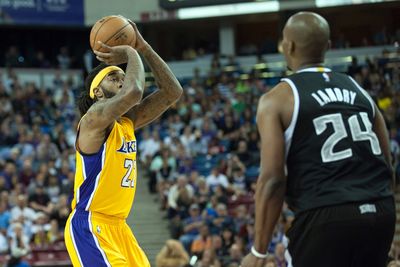 Jordan Hill appears to be headed to Indiana, where he will fill the void left by Roy Hibbert.

Free agent big Jordan Hill has signed with the Indiana Pacers, according to Sean Devaney of the Sporting News. Terms of the contract are still being worked out but “should be done soon,” Devaney reports.

The Lakers declined Jordan Hill’s team option this summer, which was probably a good indicator that he might not be back. While Hill was great in Los Angeles, the Lakers desperately coveted the salary flexibility that declining him would provide. Even if Hill wanted to return, there just might not have been minutes for him anymore, with Julius Randle returning and Roy Hibbert hopping on board.

The upside of the Hibbert signing is that created a void in the front for the Pacers, which Hill was apt to fill. He should be able to capably replicate Hibbert’s role as a rebounder, though the Pacers may take a step back protecting the rim. Drafted by the Knicks, Hill was traded to the Rockets halfway through the season and spent his next two years there. He played 72 games in 2010-11 but another mid-season trade sent him along to Los Angeles.

LatinoAthlete Staff - August 4, 2015
0
A coordinated attack has halted eSports' biggest event. Stream problems and disconnections have plagued The International over the last two days, and despite...