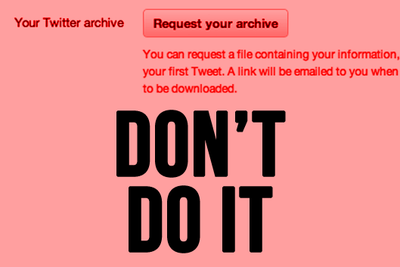 Twitter has a button that will send you an archive of all your old tweets. Never push it.

A while back, Twitter introduced a “request your archive” feature. It is available on the settings page, and you should not click the button unless you want to grind your teeth into cricket flour.

If you’ve ever looked through decade-old emails you’ve sent, you can partially grasp the feeling, but only partially. Even all those years ago, you probably had a pretty decent grasp on the basic nuances of email. Twitter, on the other hand, is a profoundly different medium that exploded in popularity very quickly, and it kind of messed us all up.

In lieu of looking through your own shitty tweets, I am offering mine up for tribute. Here is my first tweet of all time. Let’s see what you were up to, Jon!

In The Old Days, Pittsburgh Pirates Were Actual Pirates http://sbnation.com/e/920425

For the first couple months, my Twitter was nothing more than an auto-tweeting link dump. When I published an article, the system tweeted the headline and link from my account. You can view the story here if you want. In November, a month completely saturated with sports, I decided to post something on a century-old baseball poster on no occasion that nobody had any reason to care about. I didn’t even post the poster itself, I tried to tell you to click through to another site to look at it.

This is the most useless piece of content anyone has ever written. And to sell it, I decide it’s good enough to just Tweet Out The Headline With Every Word Capitalized and just drop it in front of you like it’s a rent check. Good job, Jon! Heh! Write about some sports, share it on Twitter! This’ll get people talkin’ and get ’em clickin’! Heh! God you’re such a goofus.

I sent out like 50 of these before I ever actually wrote an actual tweet. It’s a tweet in the same way the protein bars made out of cockroaches in Snowpiercer were food. The actual post, by the way, was about how I simulated that day’s Bengals-Jets playoff game in Madden. I didn’t show any of the game or talk about anything that happened in it, I just posted the final score.

This is completely sub-useless for any reader, of course. And at the time, I knew it was sub-useless. Here was the deal: as SB Nation’s weekend editor, I ran the entire website by myself on the weekends. There were no other editors, and there were no other writers. I had to write a news update about a golf tournament I wasn’t watching, and then write a short op-ed of some kind, and then post an injury update about a player I had never heard of, and then update a post about a coaching search in a sport I knew jack shit about, and then desperately make up some other sports opinion to have. I was one guy doing about six to nine peoples’ jobs, and doing a horrible job at all of them.

I did this 12 to 14 hours straight on Saturdays until both my eyelids were twitching; by the end of the day I had written 25 posts and forgotten what most of them were about. I’m not complaining, because you gotta pay your dues and all. This is just a statement of fact. 2009 Weekend SBNation.com was an absolute worthless shitpile that didn’t deserve the 76 visitors a day it received, and I am the one responsible. Sorry if you were one of them. We had stuff to figure out.

Anyway, don’t let me interrupt you, Jon! Finish this bad boy off with a bang! Leave ’em wantin’ more!

Will either of these simulations be anywhere near accurate? Wait and see. In the meantime, stay tuned for more Tecmo/Madden simulations.

Stay tuned for more of you playing madden and then just telling me the final score? GOD JON YOU ARE SUCH A GOD-DAMN TOOL

football is boring and sucky

A couple direct replies to friends aside, these were my first actual, non-automatic tweets. I actually remember feeling guilt right after I tweeted them. I was genuinely reflecting on the fact that, I don’t know, 250 people were nice enough to follow me, and I was betraying their trust by fooling around with my Twitter account like this. I genuinely thought that.

“Elsewhere”? Where else? There isn’t a Part One to this, you just decided to kick off a story with “Elsewhere.” You are a nitwit.

What’s the difference between “it’s” and “its”? Give up? So has everyone on the Internet!

No favorites. No replies. Good. Your mallcoppin’ ass deserves to be lonely.

Tiny gadgets are everywhere these days. Smaller TVs, phones, & computers. Seems like the only thing getting bigger…is my credit card bill!

This one didn’t get any favorites or replies either, but I’m still pretty happy with it. Actually, the complete absence of interaction makes this so much more beautiful. I could knock the capital letters off this thing and tweet it out right now. It would get a few favorites and replies, and if you were a stranger who stumbled across it, you’d see those interactions and think, “OK, well, at least this tweet is ‘for’ somebody out there.”

But this tweet just sits here, like a tri-fold “global warming is a hoax” display all the adults are ignoring at a science fair. There is no evidence that anyone ever acknowledged it. This is from a time when I had very few followers, and hadn’t really tweeted a lot of silly stuff yet. I don’t think people really knew what they were looking at. They probably just thought I was a giant idiot.

If this were anyone other than me, my heart would break. There are few things sadder than a stupid lonely person.

I never even saw this until today. It took me more than five years to notice it. I’m pretty sure it’s my only butt-tweet. But hey, I tweeted it at 4:20. And you know what that means! Heh! Bet I was–

wait, that’s 4:20 on a wednesday morning

good god jon get your shit together

This is the exact sort of thing you tweet when you have absolutely nothing to say but still harbor an overwhelming urge to take up two and a half seconds of everyone’s time. That urge is very real, and explains about 30 percent of my tweets to this day.

Around this time I was using a barely-working desktop I had built, and I squinted at an old CRT box monitor all day. The display was so blurred-out and fuzzy that half the time, I honestly couldn’t tell whether I had typed a period or a comma. That explains the weird punctuation. As I would later learn, this problem can be avoided if you just stop using punctuation altogether.

Sorry about the brief site issues, everybody. SB Nation is now back in action.

Building a site from nothing is really hard.

Prior to 2009, SB Nation was a collective of team-specific blogs that had their own unique ecosystems, but the actual main site — sbnation.com — was really just a portal to take you to those blogs. We weren’t sprouting off from some huge existing publication, and social media wasn’t what it is now, so we couldn’t pull in a lot of traffic that way. It started from scratch, more or less.

So we all recognized that the first few months were about figuring it the hell out. (SB Nation had a “beta” tag on its logo for the first year.) During my shifts as weekend editor — which would have made me the boss, were there other people around to be the boss of — there was this unmistakable sensation that I was working on the Moon. Nobody commented on any post, ever. I’d look over at the real-time traffic data and see that literally 21 people were visiting the site, and only four or five were actually clicking around on it.

Then I’d look back to the recap I was writing of that night’s regular-season Hawks-Magic game. I was recapping a game I didn’t watch, because there were only so many things I could actually watch. As I painstakingly tried to assemble the box score into some sort of farcical account of the game, I’d know that a) three human beings would see it, and b) I was letting them all down. Both felt bad; the latter felt horrible.

But I kept my head up, because there wasn’t really a choice. And I’d tweet things like this

Sorry about the brief site issues, everybody. SB Nation is now back in action.

to my 77 followers and pretend that any of them gave a shit. Right now, no one does. Nobody, Jon. The good stuff comes later. You don’t get to have that stuff yet. Right now, you will sit in your monitor-lit apartment with both its ceiling lights shorted out, hunched over a keyboard with the 7 key missing and a pencil you use to poke the contact whenever you need to type a 7, and you will get to work shoveling dung for nobody.

Oh, and stop capitalizing your tweets, you chucklefuck. Capitalizing on Twitter is like swimming with your shirt tucked in.

LatinoAthlete Staff - August 28, 2015
0
Wilson clarified to reporters that his Recovery Water didn't help him heal a concussion, but may have helped him prevent one. Russell...