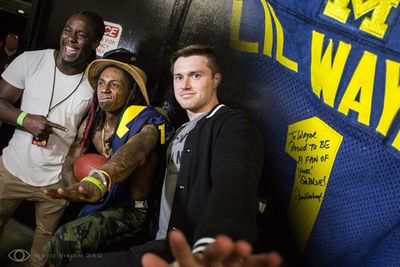 Lil Wayne performed in Ann Arbor on Friday night, and he ended up getting a Michigan football jersey out of it.

The rapper has already rooted for nearly every NBA team … maybe it’s time to move on to the Big Ten?

.@LilTunechi – Proud to be a fan of my man Lil Wayne. Hope you like the jersey as much as we like seeing you in it! pic.twitter.com/itjd1ZSf9T

In the photo with Wayne are two former Michigan quarterbacks: Denard Robinson, now a running back with the Jacksonville Jaguars, and Jack Kennedy, now a rapper, who opened for Wayne on Friday night.

Harbaugh signed the jersey with:

Proud to be a fan of yours! Go Blue!

Contributor - June 8, 2017
0
When it comes to Chicago Cubs star Addison Russell, he's riding the denial train when it comes to domestic violence accusations against his wife. Apparently,...