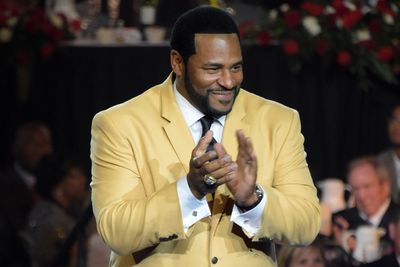 Jerome Bettis says The Bus will always and forever run in Canton, Ohio in his Hall of Fame speech on Saturday.

Pittsburgh Steelers running back Jerome Bettis was enshrined into the Pro Football Hall of Fame on Saturday, and was the last person up to give his speech. There were more Steelers fans than anything else in the crowd, and Bettis got a “Here we go, Steelers” chant going at the start of his speech.

“We’re in Canton, Ohio, but this is Steeler country,” Bettis said.

Bettis addressed the family of Junior Seau first, saying that Seau was a phenomenal competitor and that his legacy will last forever in the Hall of Fame. Seau is also part of this year’s class, and was presented by his daughter, Sydney, on Saturday.

From there he made it clear that he couldn’t have reached this point without help.

“I could never stand here and accept all the credit for my success,” Bettis said, “Please understand this night is about me, but it’s about all of those who impacted my life.”

Bettis then thanked his wife, Trameka, for “allowing me to live my dream, and taking care of us,” calling her the real superstar of the family. He kept with his family, thanking his children, his siblings and his mother. He thanked his sister and brother for stepping up when his father passed away. He also thanked his father, and said he taught him how to be a man. He was very emotional at that point, talking about the work his dad put in for him and his family.

He said that his dad sent him off the school and said that he didn’t have much to give him, but that he has a “good name, so don’t mess it up.” Bettis said that he hopes he’s made his father proud.

Bettis thanked former NFL linebacker and current  Oakland Raiders general manager Reggie McKenzie. He said that McKenzie’s youth football camp was a big turning point for him. He said that when people at that camp told him, then 16 years old, that he could be a good football player, that it was the first time he realized he actually had a chance at playing professional football.

He thanked Lou Holtz, his coach at Notre Dame, and told a story where Holtz sent an assistant coach to recruit Bettis, and that his nice car was parked next to another nice car that was stolen while that assistant was in Bettis’ house. He joked that, had the assistant’s car been taken, he may not have been able to join Notre Dame.

He said that there were times he didn’t love the game when he was with the Rams, but he didn’t realize it until Holtz called him and told him that he didn’t look like he loved the game anymore. Bettis was eventually traded to the Steelers, where he says the love came rushing back, thanks to Holtz.

Bettis thanked former head coach Bill Cowher, and called him “exactly the type of coach I needed to succeed.”

“More than anything though, I want to thank him for having ultimate trust,” Bettis said, “In that when he put me into the game in 1996 against the Jacksonville Jaguars to Super Bowl XL, he knew exactly what he was going to get from No. 36 every time he stepped on the field.”

He also said that Cowher deserves to be in the Hall of Fame himself.

“Coach, you are one of the biggest reasons I stand here today, and I hope someday, you stand here next to me. Because you deserve it,” said Bettis.

He then went on to thank his teammates, and named Alan Faneca, Hines Ward, Troy Polamalu, Joey Porter and Ben Roethlisberger.

“I’ve been blessed to have the best teammates you could ever have.”

He finished by saying that the bus will “always run” in Canton, OH, the home of the Hall of Fame.

It took a bit longer for Bettis to get in because he was never really considered the “best” running back at any point during his playing days. But he was still an excellent player, and incredibly consistent with eight seasons of 1,000-plus yards. At the time of his retirement, that stat made him third-best in NFL history.

He’s perfectly at home in the Hall of Fame.

LatinoAthlete Staff - August 16, 2015
0
Matt Kenseth has the pole position for the Pure Michigan 400 on Sunday from Michigan International Speedway in Brooklyn, Mich., looking for...