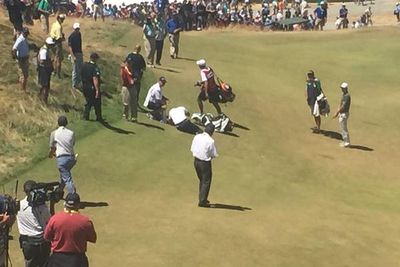 UPDATE: More from the scene of Day’s collapse and what playing partner Jordan Spieth did to try and help.

Jason Day fell while walking on the 9th green at Chambers Bay, the site of the 2015 U.S. Open. On the Fox Sports 1 broadcast he could be heard complaining of a bout of vertigo. After the round, Day spoke with Greg Norman and confirmed he had a bout of vertigo, but said he thought he would be fine going forward.

However, after a short break he did step up to take his next shot. He went on to complete the hole which was his 18th of the day.

Jason Day slipped on 9. He’s down I a lot of pain pic.twitter.com/02BeRTotiI

It is hot out here and the sun is baking the course. It’s a brutal walk for players, and Day appears to have just collapsed on 9

Vertigo has been an issue in the past for Day. He has been dealing with vertigo-like symptoms for the past month, but even before then he pulled out of the World Golf Championship last August in Ohio after experiencing a bout. He also withdrew from the Bryon Nelson Championship earlier this year due to dizziness.

Day was again forced to take a break and a knee. Prior to hitting his bunker shot, he asked for assistance to move a rock behind his ball because he was unable to do it himself due to his hands shaking. Somehow, he still managed to execute a solid bunker shot and two-putted to finish the hole.

Right after putting out, Day again went down to a knee just off the green to gather himself. He was then able to get off and walk off the course while being attended to by medical personnel. He was taken off on a cart to receive further treatment.

After signing his scorecard, Day was helped to a van. After the round his playing partner Jordan Spieth said he wasn’t sure what happened to Day and that he thought it might be dizziness. The television broadcast showed the van transported Day away from the course. He finished the round with a 70 and sits at 2-under.

Contributor - April 5, 2017
0
While the prosecution is painting a picture of the former New England Patriots tight end as a ruthless killer off the field, the defense...