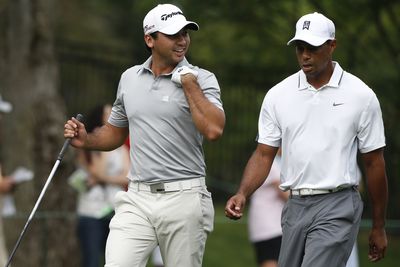 Questioning whether Tiger Woods has the motivation to win another grand slam event, starting this week at the U.S. Open, has become a popular parlor game among the punditry. When a playing peer questions the desire of the 14-time major winner, as Jason Day did at length on Monday, though, that raises the debate to an entirely new level.

“Who knows what’s going on with Tiger right now? We’re friends but I don’t get into his personal life and I don’t want to,” Day said after nine holes at Chambers Bay with his regular practice buddy and Dustin Johnson, and before launching into a soliloquy about whether Tiger has the drive to work his way back into contention.

“That’s his stuff and he deserves his privacy, but when it comes to golf, it’s very difficult because you could have all the tools in the world but if you really don’t want to be there, or if it’s something that’s off-course that’s playing on your mind — ” Day said. “The game of golf is so mental and if you don’t have everything in the right order it’s very difficult to win golf tournaments.”

Day was not exactly leaking state secrets. Notah Begay III said essentially the same thing last week about his long-time pal, who won his last major seven years ago at the 2008 U.S. Open and his most recent PGA Tour event in August 2013 (WGC-Bridgestone Invitational).

In the interim, the former No. 1 has plummeted to 195th in the world and enters the week in the wake of a last place finish two weeks ago at the Memorial.

“He beat everybody, everywhere around the world,” Begay, a Golf Channel analyst in addition to being a Tiger confidant, said during a conference call with reporters, “and it’s tough to find the motivation to just get up and go out and do it again.”

Day, whose rise to the top of the golf world has been derailed by a slew of injuries in the past couple of years, expanded on how off-course issues can mess with a golfer’s head — even that of a guy once believed to possess a psychological edge over his opponents because of his mental toughness.

Woods is not immune from human conditions that affect everyone else on tour, but he has to play out his struggles in front of the entire golf world.

“It’s so hard because he’s done what he’s done in the past and everyone’s expecting him to do that still,” Day said. “We put him on such a pedestal [and wonder], ‘where’s the old Tiger and what’s he going to do? When is he going to come back?’

“We’re just waiting for him to come back and win those tournaments like it was nothing, hunt down people like he was playing a Wednesday tournament at a country club,” Day observed. “But will we see it? I’m not sure.”

Probably not this week, unless Woods can miraculously fix by Thursday the problem Day witnessed on the links-style track outside Tacoma, Wash., and that has plagued Tiger for some time — wayward tee shots.

“Tell you what, if he could get on the fairway, he’d probably be back to where he was,” Day averred. “His iron play is just ridiculous how good it is right now, it’s really special.”

Woods’ metal wood was serviceable, Day said, but the big club, not so much.

“The driver and the 3-wood — the 3-wood is okay, the driver is a little — gets a little wide sometimes,” he noted. “But I think that’s the biggest thing for him right now is to really kind of get on the fairway. His short game looks pretty good.”

Day echoed Rory McIlroy, who spoke of Woods’ domination in the past tense almost a year ago, and wondered whether Tiger had the will to work hard enough to get back into contention with today’s top players.

“It just depends on how much you want it. It’s tough. He dominated the game for so long, and that’s what I admire about him the most. He dominated the game so long, and he was so motivated to win,” said Day. “He was No. 1 for a very, very long time, and it’s hard to do that. You’re climbing Mt. Everest and he’s fallen off it a couple of times and climbed back up there again. Once people understand how hard it is to climb Mt. Everest, it’s hard to do it again.”