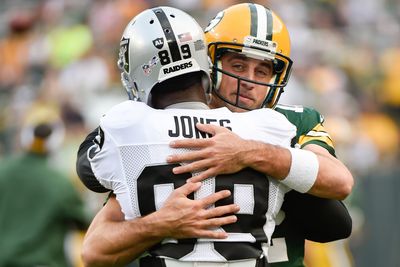 James Jones returns to the Green Bay Packers. We take a look at the fantasy implications.

After being cut by the New York Giants on Saturday, James Jones was signed by the Green Bay Packers the following day. Jones spent seven years in Green Bay before seeking more money and opportunity with the Oakland Raiders in 2014. The Raiders released Jones after one season. With Jordy Nelson’s ACL injury taking him out for the season, the Packers were in need of a receiver, and Jones offers familiarity with quarterback Aaron Rodgers.

Jones’ best season with the Packers was in 2012, when he finished with 64 catches for 784 yards and 14 touchdowns. Jones was never a threat in terms of speed in physicality, but his experience with Rodgers over the years has enough value to warrant another shot with the receiver-needy Packers.

Fantasy impact: Jones was never a fantasy stud, and his best days are likely behind him. The Packers will look to groom their young receivers Ty Montgomery and Jeff Janis while supporting their starters with Jones in the meantime. At best, Jones is a streaming option if needed. He’ll likely have a few big weeks, but they’ll be few and far between. He’s a WR5 in all formats.

LatinoAthlete Staff - September 9, 2015
0
If you haven't yelled "road house" and kicked over your clothes hamper in a while, consider Ronda Rousey landing her latest movie gig a...