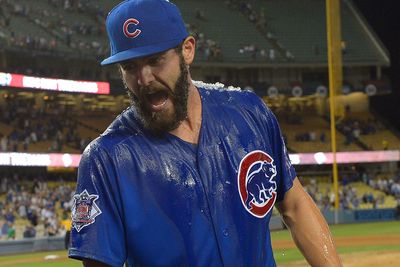 Jake Arrieta gave Chicago Cubs fans their first no-hitter since 2008, and naturally there was plenty to celebrate. His teammates ensured his temperature was well-regulated with a celebratory ice bath while Jake almost said a naughty word.

We’ll allow it. After all, you did just bring the Cubs some joy. Here’s the final out, in case you missed it.

@cubs : NO-HITTER! Jake Arrieta throws no hitter ,as the Dodgers are no-hit twice in 9 days. Here’s last out pic.twitter.com/bEwFiwc30m

Contributor - May 25, 2017
0
Oscar De La Hoya is making a valiant effort to get his point acrross about the “joke of a fight” between legend Floyd Mayweather...