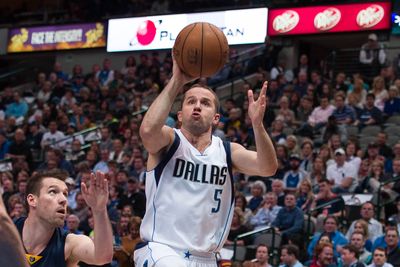 The Mavericks have re-signed their backup point guard, as expected.

Barea was a steal when he signed with the Mavericks one game into the season for the league minimum after Minnesota bought his contract out. He played nearly every game and even started the final two games of the postseason after Rajon Rondo was dismissed from the team. He had mutual interest with the Mavericks in re-signing, but the Mavericks had to sign their free agent targets, DeAndre Jordan and Wesley Matthews, first.

Barea was discovered by Dallas and spent a couple seasons developing in their D-League system after they signed him as an undrafted free agent. The diminutive point guard from Northeastern averaged about 20 minutes per game in the 2009, 2010 and 2011 seasons, culminating in a title. In the NBA Finals, Barea started the final three games and was the needed boost for Dallas to win the series.

When the Mavericks chose not to bring back the title team, Barea signed the four-year deal with the Timberwolves that eventually led to his buyout this season. Considering his size and the way he came into the league, the 31-year-old Barea is one of the better success stories in the NBA.

His number one option was always to re-sign with the Mavericks and fortunately for both parties, they had the space to bring him back. The point guard situation in Dallas has been nebulous for several seasons, transition from Darren Collison to Jose Calderon to Jameer Nelson to Rajon Rondo, but Barea is sure to factor in somehow. He’s a solid offensive fit for head coach Rick Carlisle’s flow offense and his ability to get into the lane will help create for Jordan