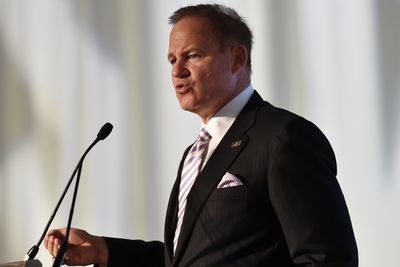 August 5, 2013: Les Miles allows running back Jeremy Hill back onto the team after a player vote. Hill had been suspended for an incident including video of him assaulting a man in a bar fight. Hill had previously pled guilty to having a sexual encounter with a 14-year-old girl when he was 18.

August 5, 2014: Les Miles allows safety Jalen Mills back onto the team after a battery charge, allegedly for punching a woman, was reduced to a misdemeanor. He’d eventually enter a pretrial diversion program.

August 6, 2015: Les Miles allows offensive tackle Jevonte Domond back onto the team despite an ongoing case. The player has been accused of choke-slamming his fiancee.

Miles clearly treats each discipline decision as a unique circumstance, as he’s booted valuable players for less than what third-stringer Domond is accused of doing. But letting this news coincide with the beginning of fall camp every year is uncomfortable, to say the least.

BTW, you have a problem. The College Football Playoff is on New Year’s Eve, and you will happily avoid any social activities that come between you and watching it. (So will we, so look at that! We have social activities now.)

LESS THAN A MONTH FROM NOW, you will be watching Alabama-Wisconsin. Ian Boyd says the biggest key is actually the passing game.

NOT LONG AFTER THAT, you will be watching Oregon-Michigan State. And you are listening to a new Dr. Dre album right now, and everything is pretty good.

The e-Les-toral college. 2003, 2007, 2011. If presidential candidates are arguing on TV, then it’s time for LSU to make a national title run. Bill Connelly on what the Tigers need to win battleground states. Besides, uh, curious reinstatements.

Trump is Michigan. If every Republican candidate were a Big Ten team.

What Hall of Famer Junior Seau means to Polynesians is worth your time.

NOPE. Vanderbilt wisely apologized for a poorly planned tweet that reminded many of the sexual assault trial against a group of former football players.

Adidas … Texas A&M is literally dressing up for Halloween.

Jimbo’s hairline is the 2014 FSU fourth quarter of hairlines: you just cannot put this thing away.

Jimbo Fisher’s hairline is the comeback player of the year http://t.co/vcagjPdl1z pic.twitter.com/5fKLF0lsKl

LatinoAthlete Staff - August 19, 2015
0
The second ranked tennis player in the world has a new, second job. Fresh off his win in Montreal this past weekend, Andy...