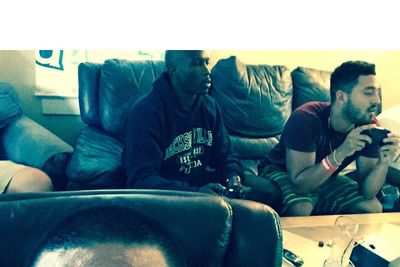 Anybody in Norfolk play FIFA15, I will come to your house & politely embarrass you on Xbox One in front of your family & friends…

Chad Johnson was NOT messing around when he issued this FIFA challenge on Twitter. When someone responded, he actually went through with it!

Fool think I won’t pull up to his house & go straight to the refrigerator then beat him in FIFA15, he gone learn today…

And here’s more visual evidence of the match going down. No big deal, just Chad Johnson hanging out in a random person’s living room playing FIFA.

Unfortunately for Johnson, he didn’t keep entirely true to his word. He did not politely embarrass his opponent. Instead, he lost.

like I said…niggas lose in Fifa every day b!!!!!! 2 hours for that L…you’re welcome @ochocinco pic.twitter.com/kvTJGG35T7

So in the end Johnson took an hour and 45 minute ride from Richmond to Norfolk just to lose a FIFA game by one goal.

According to uberestimate.com, that’s about $500 roundtrip. Johnson can obviously afford it, but that’s an expensive FIFA loss.