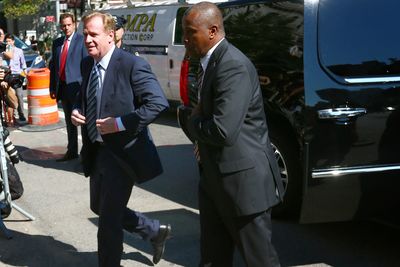 Tom Brady got his four-game suspension overturned in federal court Thursday, meaning he’ll be able to play in the Patriots’ season opener next week. But the ruling by Judge Richard Berman has bigger ramifications than Brady’s return. (Well, maybe not to Patriots fans, but, hear me out.)

You might think that the overturned suspension means that a federal judge found that Tom Brady didn’t cheat, but that’s actually not really what was up for debate here at all. Rather, Judge Berman’s ruling comes down harshly on the way NFL commissioner Roger Goodell handled the Brady case. Berman found that Goodell well overstepped his boundaries by essentially making up a punishment for Brady because he felt like it, and that Goodell stacked the arbitration process so that it would be unfair to Brady.

For years now, Goodell has leaned on the “conduct detrimental” clause of the NFL’s collective bargaining agreement to rule on a wide range of things that he thinks are bad for the NFL. Judge Berman’s ruling rips this apart.

Here is the crux of Judge Berman’s decision, stating the reasons why he is overturning Brady’s suspension:

(B) and (C) are examples of Goodell failing to provide a fair arbitration process, which might have been enough to overturn the suspension on its own, but what stands out to me is (A).

Two things I have written in the past few months about this case come to mind. In January, I wrote that the NFL had a punishment for tampering with game equipment, and it wasn’t a particularly large one: a fine of $25,000. Instead, Goodell ended up fining the Patriots $1 million, taking two draft picks. And then, on top of that, they suspended Brady, even though the NFL’s manual prescribes a team punishment rather than a player punishment.

Goodell argued: “Mr. Brady had notice, and in fact was fully aware of, the established rule governing the pressure of NFL games [sic] balls … and [had] ample reason to expect that a violation of that rule … would be deemed conduct detrimental.”

Let’s think that through: Goodell was trying to argue that there is a punishment for deflating footballs, but that Brady’s participation in violating the rule against deflating footballs could be construed as “conduct detrimental,” which could have a larger punishment.

Berman absolutely tears into this line of reasoning.

He finds that the NFL never actually explained what they were punishing Brady for:

He finds that Brady should not have expected the NFL to overlook pre-existing standards and synthesize a new punishment:

The Court finds that no player alleged or found to have had a general awareness of the inappropriate ball deflation activities of others or who allegedly schemed with others to let air out of footballs in a championship game and also had not cooperated in an ensuing investigation, reasonably could be on notice that their discipline would (or should) be the same as applied to a player who violated the NFL Policy on Anabolic Steroids and Related Substances.

And he finds that Goodell’s decision to do so is bogus:

When it is clear that the arbitrator ‘must have based his award on some body of thought, or feeling, or policy, or law that is outside the contract[] and not incorporated in it by reference … the arbitrator has failed to draw the award from the essence of the collective bargaining agreement.

Goodell’s method of using vague wording to come down on whatever he feels like turns out to be incredibly shoddy from a legal perspective. Goodell has tried using the “conduct detrimental” clause to make the NFL his personal judgment zone. Going forward, it’s clear that this is not legally okay.