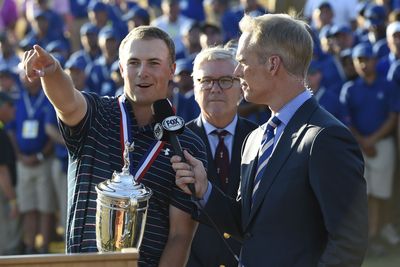 Fox bought the rights to the U.S. Open for the next 12 years. So there is at least one bright spot here: they have to get better at broadcasting golf, because they paid a large amount of money for it and several other PGA events. When it comes to sports, Fox buys things, doesn’t read the manual, and then figures out the whole operation while the vehicle’s in motion. Sometimes they hit a few parked cars as they get going, and the 2015 U.S. Open will just have to go as another entry on the accident report.

They do have some cool stuff they can legitimately say worked, like the ball tracker, which helps the 97% of the population that cannot spot a white ball in flight against a light blue sky. Greg Norman was pretty good, even if he struggled to say the word “otolith,” and even if half that pretty-goodness is his accent. Americans cannot resist sports commentary with an accent, particularly if they’re convinced that accent instantly conveys some set of superior character attributes.*

*Australian accent hints: tougher, more chill than Americans, and possibly capable of effortlessly surviving months in a desert climate at the drop of a hat.

The rest is and was very bad. Even the casual sports omnivore dropping in on a slow weekend could tell that this was bad TV made badly and at great expense. Fox missed big shots, or was late to them. They showed a shockingly low number of actual live golf shots relative to their peers. They ran an information-poor broadcast that often missed player ID and score, and at one point lost their leaderboard graphics package entirely. Cameras had difficulty tracking the ball, announcers ran together and over each other, and interviews ranged from the mundane to the bizarre. Somehow, on a seaside course with adjacent mountain scenery, the 2015 U.S. Open felt like watching golf through a spyglass.

It was fundamentally bad TV for these reasons.

The first: televised golf is one of the hardest sporting events to pull off with anything resembling competence. It takes place in staggered series across 18 holes with at least one camera on each hole, and multiple cameras on most. For the TV production geek looking up at 70 monitors of green grass, it doesn’t mean just paying attention to two teams. It means knitting all that together into a live narrative as it’s happening, and doing it all from the production truck with at least eight different people in your ear and 18 different stories going on at once.

The phrase “shuttle launch” is used a lot, and with reason. If you do it right, everything ends up floating along nicely and with a deceptive lack of effort. Do it wrong, though, and everything blows up on the launchpad.

Two: a lack of chemistry and flight hours together in the booth and production truck. It’s not like Mark Loomis, the producer of Fox’s U.S. Open coverage, hasn’t done this before. Loomis worked with ABC/ESPN on three of the four majors prior to coming to Fox, and was hired especially for this. But unlike those ABC/ESPN crews or CBS’s Masters team, the Fox team hasn’t been working together in some variation for fifteen or twenty years. They don’t know the quirks of each other’s timing, and haven’t developed the kind of rhythm veteran crews have. That kind of inexperience might not be totally noticeable on something like a football broadcast. In something as intricate as televised golf, though, a couple of hitches in the rope make big knots with a quickness.

That shallow pool of experience makes for big mechanical mistakes, but also forces errors of touch. Joe Buck was as much a victim of this as anyone. He had the worst time with the first two days of the Open because that, more than any other time, is when you need a collected store of otherwise truly useless/interesting information to drop about otherwise obscure or lesser known players or courses. Buck didn’t have that, and had to anchor Fox’s first broadcast of a major in what was effectively his first work in the medium. It’s not that he couldn’t have succeeded. It’s that no one could in that situation.

Traditionally, Fox’s first move is to just heave a pile of money at a task, and hope the weight of sheer cash moves whatever obstacles might be in the way.  What’s lost in the rush and the cash tsunami are the details. In college football, the running gag is that football broadcasts on Fox feature at least one shot of the marching band at all times, because this is their very blunt and limited understanding of collegiate color. In soccer, it meant putting Gus Johnson in the lead spot simply because he was available and exciting. This, despite Johnson having no experience calling international soccer, and often struggling with the basics.

Curt Menefee saying “match” when he should have said “round” doesn’t destroy a broadcast, but what it does is confirm what you might have been thinking all along about Fox just deciding to do things without much practice.

Three: Bad ideas. Sandwiching in human interest stories when you could be showing live golf shots is a bad idea, and it’s worse when you run a Tiger/Michael Jordan piece completely at odds with the rest of the broadcast.

Four: Chambers Bay was a strange, hostile stage for good sports television. Links golf can look spectacular on television, but finding the ball against what looked like ruined automotive floormat carpet is one of the worst jobs in TV. There’s no real getting around the convoluted staging of the course itself, something that had spectators and golfers falling down hillsides all weekend.

Chambers Bay wasn’t just hard for TV people, by the way. The beat reporters ended up roped off from some of the most important scenes of the tournament via the strange topography of the course. In the media room afterwards there was near jubilation when Dustin Johnson missed his birdie putt. They weren’t Jordan Spieth partisans. The miss just meant they got to go home, an option the TV viewer doesn’t really have. You’re stuck with Fox on golf for a decade.