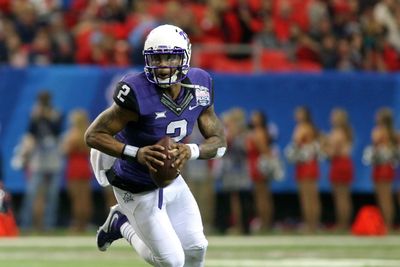 Trevone Boykin and Ezekiel Elliott enter the college football season as co-favorites on the odds to win the Heisman Trophy at the sportsbooks.

With quarterback Trevone Boykin leading the way last season, the TCU Horned Frogs put together an outstanding 12-1 SU and 11-2 ATS campaign. The Horned Frogs enter the 2015 season with a lot of hype including Boykin as the co-favorite to win the Heisman Trophy.

Trevone Boykin is currently going off at +500 to win the Heisman Trophy according to sportsbooks monitored by OddsShark.com. Boykin finished eighth in the nation in passing yards last season with 3,901 and seventh in touchdown passes with 33.

He also used his rushing ability effectively in rushing for 707 yards and eight touchdowns. Similar numbers and another strong season by TCU could be enough to catapult Boykin to a Heisman Trophy.

Boykin’s biggest competition comes at the hands of running back Ezekiel Elliott, who is also going off at +500 to win the award. Elliott finished third in the nation in rushing last season with 1,878 yards and punched it in 15 times.

Elliott was the breakout star in Ohio State’s last three games of the season, rushing for 220 yards against Wisconsin, 230 against Alabama, and 246 against Oregon.

With Braxton Miller (+3300 to win the Heisman) converting to wide receiver, the odds on quarterbacks J.T. Barrett and Cardale Jones at Ohio State have shot up considerably. Barrett is the betting favorite to win the starting job and take home the Heisman Trophy at +900 while Jones is going off at +1400.

Whoever is under center for the Buckeyes is going to put up big numbers and likely be back in the championship picture.

Other top contenders to win the Heisman Trophy (all going off at +1200 each) include quarterbacks Jeremy Johnson (Auburn), Cody Kessler (USC) and Deshaun Watson (Clemson) and running backs Nick Chubb (Georgia) and Leonard Fournette (LSU).

Chubb put up solid numbers last year despite splitting carries with Todd Gurley, and will now get his chance as the full-time featured back in Georgia.

Bettors looking for value could consider Oklahoma’s Samaje Perine at +2500. Perine rushed for 1,713 yards and 21 touchdowns as a true freshman, and put his name on the map with a 427-yard, five touchdown rushing day against Kansas.

If the Sooners overachieve this year, Perine figures to be the reason why, and he has the talent to rush his way into the race.

LatinoAthlete Staff - July 26, 2015
0
John Smoltz's induction into the MLB Hall of Fame Sunday included a speech with a bunch of fun stories from his life...