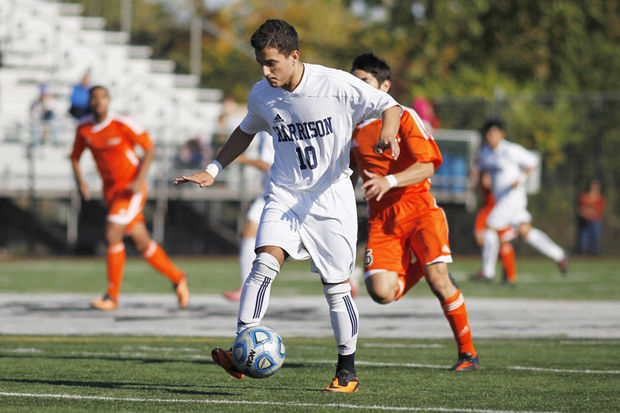 For Mike Rusek, the mark of a strong program doesn’t solely lie in the yearly win totals, but the willingness of players to step up in key moments.

With one of his most talented players sidelined with an injury for today’s Hudson County Boys Soccer Tournament final, that’s exactly what the Harrison coach saw unfold at Caven Point in Jersey City.

Playing without its ultra-versatile defender Modou Sowe, third-seeded Harrison showcased its talent and depth with an impressive 2-0 victory over fourth-seeded Memorial.

Jose Neto scored a pair of first-half goals, as the Blue Tide (14-0-1) won its second Hudson County championship since winning the inaugural tournament in 2009. 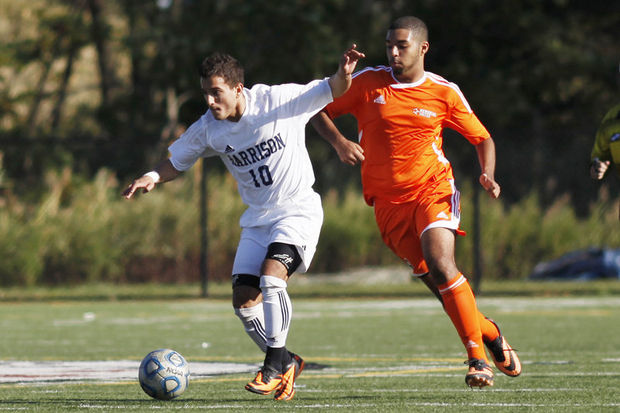 “Without Modou, we knew it was going to be harder,” said Neto, who has recovered nicely from a torn anterior cruciate ligament in his knee that he sustained as a sophomore. He and Sowe entered yesterday’s game tied for the team lead in goals, with 12 each.

To atone for the loss, defenders Leandro Gonzales, and junior twins Rodrigo and Marcelo Esquivel ― among others ― brought their games to new heights in slowing down the high-powered Tigers (12-5). Ranked No. 15 in The Star-Ledger Top 20, Harrison engineered its sixth consecutive shutout. Moreover, the Tide has surrendered just five goals this season ― in total.

“We’ve really been known for a while as an offensive team but we’re really an excellent defensive team,” Rusek said. “We really feel like we have the makings of a great program that has numerous players.”

Perhaps no verdict during the current streak was more impressive than today’s shutout. The Tigers entered the game having won 11 of their previous 12 matches ― including a pair of resounding victories over No. 6 St. Peter’s Prep. A week after rallying from a 2-0 halftime deficit against Marauders, the Tigers erased another 2-0 halftime lead in the county semifinals on Wednesday, en route to a 3-2 victory over top-seeded Prep.

But Harrison struck for two goals in the first 15 minutes today and controlled the tempo thereafter.

Neto got the Blue Tide on the board in the eighth minute when he headed a corner kick from Kevin Villanueva past Memorial goalie Mark Giron. Seven minutes later, the senior striker was at it again, this time blasting a shot off the bottom lip of the crossbar and into the net, as Villanueva picked up his second assist on the play. 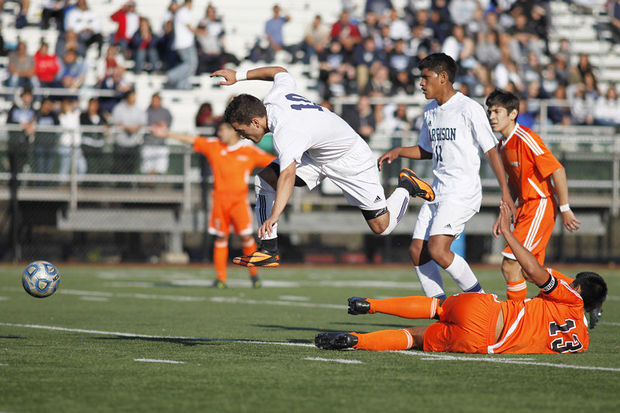 While Rusek admitted he was a bit “weary” at halftime ― given Memorial’s recent second-half dramatics ― his defense assured that another Tiger comeback would not materialize.

“Modou is a big part of our team,” added Gonzales, who cut off one of Memorial’s best scoring chances in the first half by chasing down Gian Garcia from behind. “Last game against Kearny, without him, I don’t think we would have won.”

“It was a tough break. The first goal we gave up there in the eighth minute on the corner hick changed the game,” said Memorial coach Albert De Los Reyes. “We did our best to open it up, but that wasn’t working for us.”

Harrison, which lost to Haddon Heights in last year’s Group 1 state championship, will compete in the Group 2 state tournament this season. With the Hudson County title tucked away in its back pocket, the Blue Tide expect to continue its ascent as the calendar turns.

“We hope to look at this and say if we can do this in October,” said Rusek, “we’re capable of doing it in November.” 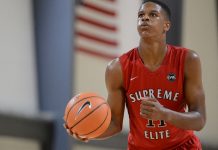 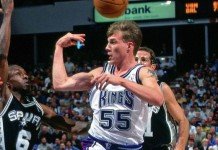