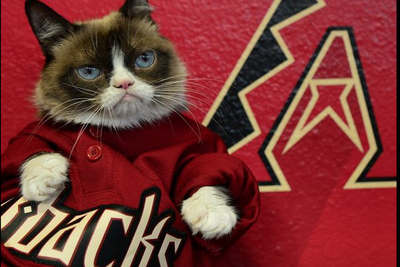 Major League Baseball teams have interesting promotional days, like when the Washington Nationals had Star Wars day and dressed up their mascots to look even more terrifying than usual.

This time, the Arizona Diamondbacks have stepped up to the plate with a very weirdly themed game day: GRUMPY CAT MONDAY.

Yes, supposedly Grumpy Cat will throw out the first pitch because she’s an Arizona native. Not so sure how that’ll work out with the lack of opposable thumbs and all — we’ll have to wait and see!

An Arizona native, @RealGrumpyCat is at Chase Field to “throw” out today’s ceremonial first pitch. pic.twitter.com/hcSwYgWyqp

So far, Grumpy Cat looks like she’s having an amazing time. She made it into the clubhouse.

And she’s getting through warmups out on the field (although “warming up” looks more like sniffing a jersey, but whatever).

@abc15 Grumpy cat getting warmed up for tonight’s first pitch at the @Dbacks game! pic.twitter.com/5V2bZKjqHE

GET PUMPED FOR GRUMPY CAT MONDAYYY!!!!!

LatinoAthlete Staff - September 10, 2015
0
Oregon-Michigan State! Oklahoma-Tennessee! Other games, surely! Week 1 was fun, wasn't it? We got to see some bluebloods implode, a few upsets of ranked teams,...