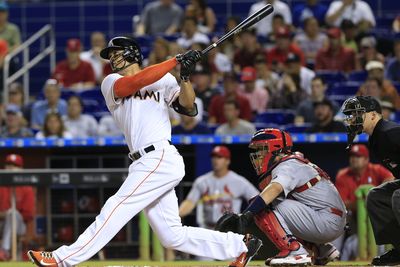 Giancarlo Stanton’s magnificence has been derailed by injury yet again.

Giancarlo Stanton will miss four to six weeks after breaking the hamate bone in his left hand against the Los Angeles Dodgers on Friday night, according to ESPN’s Tim Kurkjian. Stanton was in the midst of an MVP-caliber season with an MLB-leading 27 home runs through 74 games.

After the game, Stanton said that he initially hurt his hand in the sixth winning when “my bat dug into my hand a little bit.” His hand swelled and the pain grew worse as the game went on. He called his ninth inning at-bat “the icing on the cake.”

Stanton has had an unfortunate history of injuries. An excellent 2014 season ended after 145 games when he was struck in the face by a pitch. He had 37 homers and 105 RBI before the injury. Before that he appeared in 123 and 116 games for the 2012 and 2013 Miami Marlins, respectively.

Stanton’s injury is a rather hefty kick to the gut for the Marlins, who were already in five-game losing streak (and had lost eight of their last nine) with Stanton in the lineup. At 30-45 overall, Miami’s already slim postseason chances have to be considered nearly zero. Stanton meanwhile, just 25, may have to wait another season to collect the accolades he deserves.

Joe Frisaro of MLB.com for the Marlins reported Stanton still had significant swelling and underwent an X-ray but it was unable to make a firm determination. Further CT scans and an MRI revealed the hamate fracture — a small bone centrally located in the wrist of the hand — which would require surgery and the aforementioned recovery time period.

The Marlins believe there is no ligament damage to Stanton’s hand, an upside to Stanton’s injury. Utilityman Miguel Rojas has been called up by the Marlins during Stanton’s absence. Ken Rosenthal of FOX Sports, who originally broke the news prior to details being released, said the injury could cause the Marlins organization to sell at the impending trade deadline. Considering the team’s record, it wouldn’t be a surprise, though moving long-term players would likely not be an option.

LatinoAthlete Staff - August 6, 2015
0
Johnny Manziel will get some time with the starters, Kiko Alonso and Clay Matthews both missed camp on Thursday and more from...