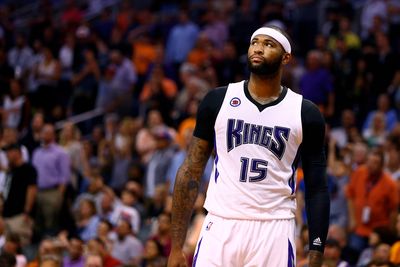 The Kings coach is reportedly doing everything he can to get his team to trade the 24-year-old center.

The Sacramento Kings have a big problem, according to Adrian Wojnarowski of Yahoo! Sports. Head coach George Karl, who was hired in February after the surprise firing of Mike Malone, reportedly has an “intense desire” to trade All-Star center DeMarcus Cousins. According to Wojnarowski, the only thing keeping Cousins in Sacramento is the reluctance of Kings owner Vivek Ranadive to trade the 24-year-old big man.

Wojnarowski reports that the relationship between Cousins and Karl has become “irreparable”. Karl has reportedly been pushing the idea of trading Cousins on new vice president of basketball operations Vlade Divac, and has even attempted to turn Kings teammates in favor of the idea.

There were rumors on Monday that the Los Angeles Lakers are pursing Cousins, but Wojnarowski reports Karl desires veteran players back, not a draft pick like the Lakers’ No. 2 selection in Thursday’s draft. Ranadive has become reportedly become “irritated” with Karl’s firm believe that he can’t coach Cousins.

It sounds like Cousins could be dealt if and when Ranadive authorizes the move. Karl and members of the front office have already told opposing teams of their desire to trade the No. 5 pick in 2010.

Cousins appeared to respond to the report on Twitter not long after the story broke, using emojis to depict a snake in the grass.

Cousins averaged 24.1 points, 12.7 rebounds, 1.7 blocks and 3.6 assists per game this past season, setting career highs in each category. Cousins is under contract through the 2017-18 season, and will earn just over $15.8 million next year.

How to watch college football’s opening night on TV or online,...

LatinoAthlete Staff - September 3, 2015
0
Park on the couch and bask in the ambiance of college football's opening number. The offseason is officially over, folks. College football...