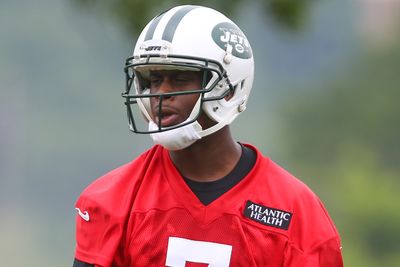 Geno Smith will miss six to 10 weeks after getting sucker punched in the jaw by defensive end I.K. Enemkpali in the New York Jets locker room, according to Seth Walder of the New York Daily News. Smith reportedly has a broken jaw and will require surgery. Enemkpali has reportedly been released.

Bowles: “He got cold cocked, sucker punched whatever you want to call it, in the jaw.”

Bowles added that the altercation was “something you don’t tolerate” and “childish.” According to NFL.com’s Ian Rapoport, Smith held up a finger to Inemkpali during an argument that became over-heated.

Though the Jets signed veteran Ryan Fitzpatrick in the offseason, Smith was named the Jets’ starter by offensive coordinator Chan Gailey this past May. Smith has struggled at times since being thrust into action as a second-round rookie in 2013. He has an 11-18 record as a starter and has thrown 34 interceptions to 25 touchdowns.

Still, there was hope he would take another step forward in Year 3, especially after the Jets made concerted efforts to add weapons like veteran wide receiver Brandon Marshall and second-round rookie deep threat Devin Smith. Smith’s earliest return would be after the Jets’ season-opener.

Inemkpali was a sixth-round draft pick in 2014. He appeared in six games last season and recorded two pass deflections and two tackles.

LatinoAthlete Staff - August 2, 2015
0
Robbie Maddison is clearly awesome and maybe crazy. WTF: pic.twitter.com/wNuqIAgc7Z — OHB (@ohholybutt) August 2, 2015 What you are seeing there is exactly what it...