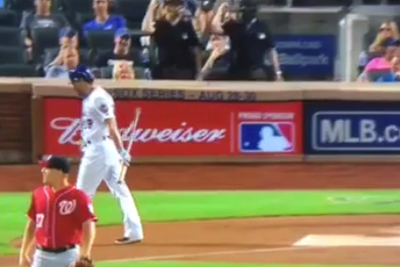 The New York Mets has an impressive performance against the Washington Nationals on Sunday, even after recently having a quintessential LOLMets moment a few days ago. But all of that has to take a backseat to the pair of umps sitting in the first row.

Look at their impeccable timing.

GIF: Fake umpires even call time and “toss” a ball back to the pitcher pic.twitter.com/IbRyoMTZEA

With the toss and punchout so meticulously synchronized, these two dudes had to have practiced beforehand, right?

Indeed they have! The pair of fake umps is raising money for UMPS CARE Charities, the official charity of MLB umpires. They ultimately reached their goal of $5,000.

Even Marlins Man decided to get in on the cause.

@ZanerzasNJ I wanted to talk to the guys, learn about their charity