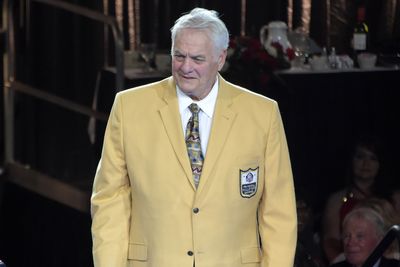 Fran Tarkenton spoke for Mick Tingelhoff at the Hall of Fame enshrinement ceremony on Saturday.

Former Minnesota Vikings center Mick Tingelhoff was inducted into the Pro Football Hall of Fame, and Fran Tarkenton was there with him to help him through his speech. Tingelhoff has had health issues in recent years, including memory issues, and Tarkenton said that Tingelhoff is a man of few words.

Tarkenton called Tinglehoff his best friend, and his voice cracked when he mentioned the long wait for Tinglehoff, who is a Seniors Committee selection. It was a brief speech, but a very sincere one.

Tingelhoff played 240 games over the course of 17 seasons in the 60s and 70s. That’s impressive longevity, even for an offensive linemen. He earned the starting center job as a rookie and kept it throughout his entire career, and never missed a single game or practice. Playing at a time where guys like Dick Butkus and Ray Nitschke were annihilating offensive linemen left and right, Tingelhoff held his own.

Tingelhoff was inducted into the Vikings Ring of Honor in 2001 and had his No. 53 jersey retired by the franchise.