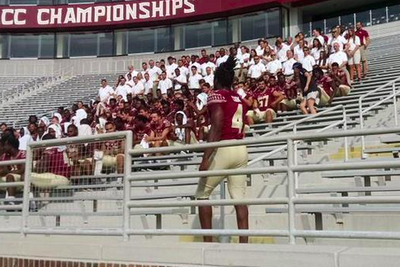 Dalvin Cook’s team has created alternate photos that apparently account for either potential outcome of his case.

Dalvin Cook is going the team pic. But they will also take one with out him. Status still pending. pic.twitter.com/0qUofqIv47

Now one without Cook. pic.twitter.com/iH39i1ezIN

Star running back Dalvin Cook was charged with misdemeanor battery in July, accused of hitting a woman outside a bar. He plans to contest that charge.

What do you do if you’re FSU head coach Jimbo Fisher here?

Bar the suspended player from all team activities, including media day, especially considering the national scrutiny of your program? That would almost certainly be the popular answer.

If the legal process concludes Cook didn’t do what he’s accused of doing, he’ll surely be a full member of the team again. At that point, the official team photo would lack one of its members. That wouldn’t be ideal, but is avoiding that worth this moment, which is awkward and surreal at the very least?

LatinoAthlete Staff - August 15, 2015
0
The good news is Raphael Assuncao's ankle surgery went well. The bad news is he's not coming back as quickly as originally hoped. Assuncao—perhaps the...