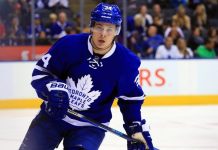 LatinoAthlete Staff - August 16, 2015
0
The field is ready for the final day from Whistling Straits and viewers will be able to watch most of the action. Only...