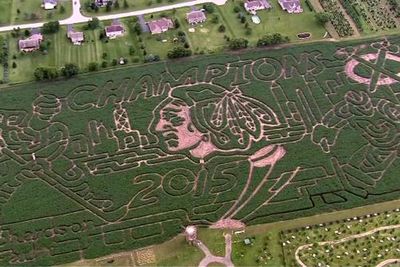 Win the Stanley Cup; get a corn maze in your honor.

That is one amazing corn maze. It’s actually five corn mazes which cover a total of 33 acres. Two hockey players, two logos, the Chicago skyline and 2015 Champions are all part of the puzzle. There is even a hockey puck. Even more impressive is how quickly Richardson Farm was able to make it happen. There wasn’t a long plan in place. Instead they changed the original design not long before the cutting.

“So we called our maze designer out in Idaho and asked if he had time to create a new design,” said George Richardson. “Then we got permission from the Blackhawks to use their logo. The result is a bold design with the Blackhawks logo in the center and the Chicago skyline in the background, flanked by two hockey players and the word “Champions.”

LatinoAthlete Staff - June 14, 2015
0
Most MMA pundits didn't think it could be done. The notion of Cain Velasquez falling down—and not getting back up—was something our binary brains registered...