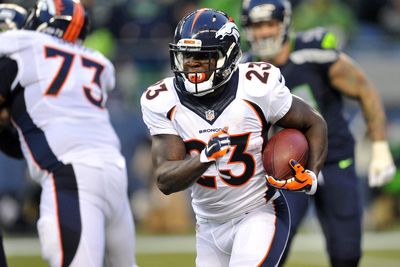 Ronnie Hillman has been wonderful in the preseason. Is it worth it to grab him at the end of your fantasy football draft?

Denver Broncos running back Ronnie Hillman is not going to start this season. That job goes to C.J. Anderson, who is currently going in the first round of several fantasy mock drafts.

However, there is really a lot to like about Hillman. In this preseason, he leads all AFC running backs with 155 yards on just 21 carries, which is good for a pristine average of 7.0 per carry. He’s also added three catches for 14 yards, as well.

What’s more, there is some talk of the Broncos set to cut Montee Ball. That may seem shocking for a guy who was the 58th pick of the 2013 NFL draft. If one thing is clear in all of this, it’s that Hillman has locked up the backup role and he should get plenty of work on third down.

Additionally, C.J. Anderson is just a second-year player, so he could lose touches due to poor play and of course due to injury. The Broncos possess one of the best offenses in the NFL, so the upside is huge for both Anderson and Hillman.

Fantasy impact: If you’re looking for a strong player to stash at the end of your draft, Hillman has to be one of the best players to take, especially if you draft Anderson. He’s a top-three handcuff.

Robert Griffin III will still be Washington’s starting quarterback whenever he...