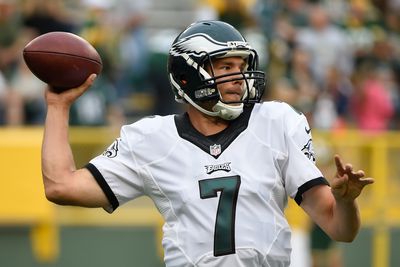 Sam Bradford made the most of his limited playing time on Saturday. We take a look at the fantasy implications.

Sam Bradford is proving why the Philadelphia Eagles were so intent on acquiring him during the offseason. Bradford was flawless in Saturday’s win over the Green Bay Packers. He was a perfect 10 of 10 on his passing attempts, totaling 121 yards and three touchdowns. He accomplished his numbers in just three drives.

A lot of credit also goes to the offensive game plan for the Eagles, which enabled Mark Sanchez to have impressive numbers as well. Sanchez completed 13 of 19 passes for 150 yards and two touchdowns.

Fantasy impact: Bradford has been one of the more intriguing fantasy quarterbacks this offseason. After all, Chip Kelly’s system made Sanchez a fantasy commodity in 2014. It’s no wonder that Bradford is starting to look like a real talent on the field again. Bradford is currently being drafted around the 10th round of most fantasy drafts. He’s rarely one of the first 10 quarterbacks taken off the board. He’s an excellent value pick if his ADP holds steady. Bradford could easily be a QB1 for fantasy owners in 2015. His injury history warrants concern, but you won’t be giving up much to draft him.

LatinoAthlete Staff - October 6, 2013
0
Despite the blowout in Game 1, the Tampa Bay Rays felt relatively confident going into Game 2. They had their ace David Price on...