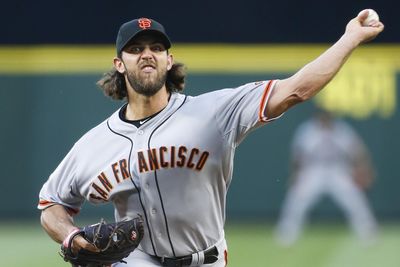 There is a full slate of MLB action this week, which means plenty of opportunity to enjoy some NBA FanDuel action. Click here for the chance to win $10,000 by spending just $5 today!

First off, a quick introduction, though if you don’t know what FanDuel is, well, you’re missing out. FanDuel is a site that offers daily fantasy sports games. Participants are given a chance every day to select new players, fill out a lineup and, most importantly, win some cash. If you choose poorly Monday you can come back Tuesday and try again. Easy as that. Click here to enter a $5 FanDuel contest that offers a $10,000 prize today!

As for what we’re going to be doing in this space: The goal here will be to direct your attention toward some players who you might not otherwise consider. If you’re here and reading this, then you already know that Mike Trout is really good. But when filling out a roster you can’t just pick out stars. You’ll blow your cap that way and get stuck praying to the baseball gods that a guy like Wilmer Flores actually gets a few hits. No, if you want to win, you have to take advantage of certain matchups — and in order to do that you have to know where to look. That’s what we’re here for. Below is the lineup I’ll be using for Tuesday, June 23.

Madison Bumgarner, Giants ($10,900): There are some good matchups Tuesday night that provide the opportunity to put together a lineup full of cheap position players. The benefit of taking chances on the players you’ll see listed below is that it allows you to go with whichever pitcher you want. Tuesday the choice should be Bumgarner. The southpaw will be facing the Padres, who whiff in 23.5 percent of their at bats against left-handers pitchers, the sixth highest number in baseball. Bumgarner has also been lights out in his past two starts (16 innings, three earned runs, 16 strikeouts, four walks). He should be good for another eight innings and close to double-digit strikeouts Tuesday night in the spacious Petco Park.

Brian McCann, Yankees ($3,600): The first of two Yankees in the lineup for Tuesday night. The reason: The Bronx Bombers will be facing Phillies pitcher Sean O’Sullivan in Yankee Stadium. O’Sullivan has been awful this season (4.79 ERA) and, somehow, has been even worse on the road (6.75 ERA). Lefthanders are hitting .330/.394/.636 in 88 at bats against him. McCann is a left-handed hitter who’s crushed right-handed pitchers all year (.288/.354/.532, nine home runs). You get the picture.

Logan Morrison, Marines ($2,400): And the first of four (!) Marines in this lineup. Morrison this season is hitting .270/.351/.449 against right-handed pitchers and has eight home runs in 185 at bats. Guess what type of pitcher he’ll be facing Tuesday night? You guessed it, a right hander, Jeremy Guthrie. Guthrie, though, isn’t your everyday right-handed pitcher. He’s got an ERA of 5.55 this season and lefties are hitting .325/.393/.571 off him. Those numbers combined this price make Morrison too good a matchup to pass up.

Robinson Cano, Marines ($2,400): Speaking of cheap left-handed hitting Marines. Yes, Cano has been awful this year. But if there’s one hurler he’ll figure out a way to hit it will be Guthrie. At this price it’s a gamble worth taking.

Asdrubal Cabrera, Rays ($2,200): There’s one reason for slotting the struggling Cabrera in here: his success in his career against R.A Dickey, who he’ll face Tuesday night. The two have faced off 13 times and in those at bats Cabrera has collected five hits, walked three times and homered twice. Granted, this is a — very — small sample size. But when it comes to a batter’s ability to hit a knuckleball a small sample size can often be telling.

Andrew McCutchen, Pirates ($4,100): And now for the shiny toys that all that bargain shopping allows us to buy. McCutchen has been red hot since a slow start. Making matters better: he’ll be facing a dude by the name of Josh Smith Tuesday night, a relatively unheralded 27-year-old hurler who the Reds just called up this week. In eight starts in AAA this year Smith had an ERA of 3.56 and struck out just 35 batters in 48 innings. He doesn’t exactly sound like a superstar. What he does sound like is the type of pitcher McCutchen should be able to tag.

LatinoAthlete Staff - August 15, 2015
0
The weather has impacted yet another major championship but TNT has adjusted their schedule so you won't miss anything on Saturday. For the...