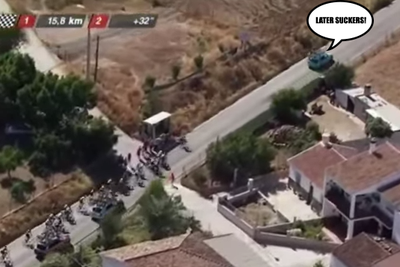 Vincenzo Nibali didn’t just cheat, he cheated in the silliest, stupidest, most-obvious way possible. This cannot be overstated. The 2014 Tour de France winner was racing in the Vuelta a Espana when he realized he had to get back in the peloton after a crash. His team did what they thought was necessary — have him hold onto their support car to gain some ground.

It’s the most blatant cheating we’ve ever seen, especially given THERE’S A HELICOPTER WATCHING THEM. That’s like those police chase videos where someone hides in a back alley thinking they’ve escaped. The team issued a hilarious statement:

“It happens in the Tour, I’ve seen it 1000 times. Try to find me an honest person in the peloton. Any sports director would have done the same thing to save their leader”, said Giuseppe Martinelli.

“I want to publicly apologise for what happened, especially for the people who feel they are angry or ashamed of me. There are lots of episodes like this in cycling and especially so after a crash. I thought I’d get a fine and time penalty that would take me out of the overall classification. I’d have even accepted a 10-minute penalty. After all, I won’t be the first or last to do this kind of thing.”

Here’s to you, cycling. Where cheating can be simply emulating something you saw in Tony Hawk’s Pro Skater.

LatinoAthlete Staff - September 2, 2015
0
After Ohio State, no team may make a bigger impact on the 2016 draft than the Irish. After the powerhouse that is...