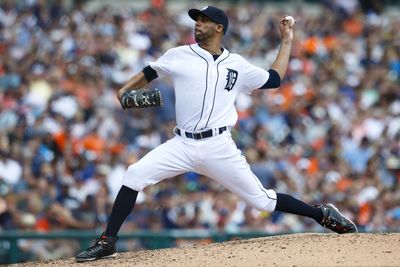 Keep up with the madness of the MLB trade deadline right here.

The 2015 MLB trade deadline is on July 31, but so far it’s been a quiet trading season. The first trade domino to fall didn’t happen until July 23, and while there are plenty of rumors since then, it appears that the larger pieces won’t fall until the deadline approaches. For Yasiel Puig, he may not be on the chopping block at all as the Dodgers have reportedly told the outfielder that he will not be traded. Of course, it’s trading season so that might not mean a thing.

There have been a couple of smaller trades already, such as the Marlins-Cardinals trade for Steve Cishek in exchange for a minor league pitcher, and the Braves-Mets trade involving Juan Uribe and Kelly Johnson for two minor league righties. However, the bigger pieces have yet to fall.

Among those are Reds’ starter Johnny Cueto and closer Aroldis Chapman, however, there are rumors among the league that Cueto may be injured. If that turns out to be the case, his trade value could drop, but how that will ultimately affect the trade deadline is still to be determined.

Add to Phillies’ Cole Hamels and Jonathan Papelbon, both who are on the trade market, and you have the makings of potentially large deals. Papelbon, in particular, has been the subject of trade talks since nearly the start of the season, and the righty has been more vocal of late about the team making a decision in regards to his future.

Another large piece up in the air is potential trade candidate, Detroit Tigers ace David Price. There have been rumors stating that he’ll likely be traded, and also that he won’t, that the team is attempting to sign him to a long-term extension.

Price’s teammate, Yoenis Cespedes, has also popped up as a major trade candidate, though he sits somewhat in the same boat as Price as far as rumors are concerned. The team has been rumored to be considering a long-term extension with him, but it’s also rumored that the Tigers would potentially trade him with the intention of resigning him after this year as a free agent.

We’ll be keeping track of all important rumors leading up to the July 31 deadline. Click here for a list of completed trades.

July 22: Can Johnny Cueto even make a difference to the Tigers now?

July 21: The Reds may have overplayed their hand with Johnny Cueto

July 21: Is something wrong with Johnny Cueto?

July 21: Which team needs Cueto or Hamels the most?

July 20: James Shields would be shocked if he’s traded

July 19: Padres likely to include cash in James Shields deal

July 19: Shields, Kimbrel and Upton are available but may not be in much demand

July 23: Jeff Samardzija bolsters value with strong start, but to what end?

July 21: Rangers and Astros in pursuit of Cole Hamels

July 20: Everyone wants to trade for Cole Hamels (unless he’s broken)

July 25: Mets said no to Padres’ demands for Justin Upton

July 25: If the Tigers decide to sell, who are baseball’s biggest buyers?

July 24: Was Gerardo Parra almost sent to the Mets?

July 24: Could Michael Morse come back to the Giants?

July 23: Padres are shopping their pitching staff, could be big sellers

July 23: Rays open to buying and selling at trade deadline

July 23: What does the Scott Kazmir trade mean for the Reds?

July 23: Pirates “want to get rid of” Pedro Alvarez

July 23: Braves getting calls about Nick Markakis but reportedly won’t trade him

July 23: Are the Braves listening to offers for Julio Teheran?

July 22: Angels open to a rental, are scouting the Tigers, Cespedes

July 22: The Phillies reportedly missed a chance to trade Papelbon

July 22: Are the Blue Jays and Padres working on a deal?

July 22: Another look at the trade market for catchers

July 22: Oakland A’s are “open for business,” everyone!

July 22: Orioles “appear to be willing” to move Kevin Gausman if it makes them better

July 22: Who can the Red Sox trade before the deadline?

July 22: Why the Tigers will buy at the trade deadline

July 22: Blue Jays not in on Latos, Haren a possibility

July 22: Todd Frazier one of a few Reds players not available for trade

July 21: Are Ben Zobrist talks between Mets, Athletics “heating up”?

July 21: Tigers could go “all-in” and be deadline buyers

July 21: The Twins need a catcher, but can’t afford a great one

July 21: The Rays will not be buyers at the trade deadline

SB Nation presents: A-Rod’s 3,000 hits taught us to love ourselves

FanDuel lineup advice for the weekend of June 26-28

LatinoAthlete Staff - June 26, 2015
0
There is a full slate of MLB action this weekend, which means plenty of opportunity to enjoy some FanDuel action. Click here...