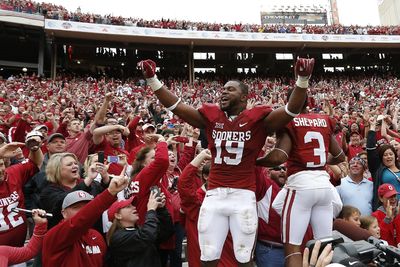 Whether the Sooners star can maximize his ability in a new role amidst defensive changes could ultimately determine Oklahoma’s 2015 upside.

Heading into 2014, the Oklahoma Sooners defensive staff had a strong vision for the role Eric Striker could play in the modern college game. A rather unique player due to his size (listed at 6’0, 215 but probably closer to 5’10), his quickness coming off the edge is easily his most defining trait and so despite his unorthodox size he’s been one of the best pass-rushers in the Big 12 over the last two seasons, with 15.5 sacks over that period.

Striker first broke onto the scene in 2013 playing the 3-4 outside linebacker position historically occupied by players like Lawrence Taylor or Terrell Suggs. As part of an overall effort to improve a run defense that ranked 58th and 72nd the previous seasons in rushing S&P, the Sooner staff moved him over to the strong outside linebacker position in their 3-4 scheme where he was to serve as a nickel/end hybrid.

In the midst of a disappointing season for Oklahoma faithful, the defense actually improved from 33rd overall in defensive S&P to 26th, but they were far from dominant and suffered from bad performances in embarrassing losses to Baylor and Clemson.

Striker was quietly very effective in this new role but opposing teams such as TCU were able to isolate and minimize his impact due to the hybrid nature of his new position and the limits it put on how often Oklahoma could use him in the pass rush.

Bob Stoops’ seat is getting warmer now and he’s responded with major staff shake-ups and strategy shifts to make the most of the roster in 2015 and protect his job. Amongst the concerns for the staff is whether or not playing Striker at the strong outside linebacker hybrid position will actually make the most of his talent. If Striker’s play isn’t having a multiplier effect on the rest of the defense then it’s unlikely that Oklahoma will return to the days of annually playing top-10 defense and contending for the Big 12 crown in 2015.

There’s a similar player to Striker out there in the college football world who was devastating as a space-backer playing in the field, blitzing the edge, and roving in the flat. His name is Darron Lee and he was a major part of the Ohio State Buckeyes’ championship run.

Here’s how they fared in comparison over the 2014 season:

While Darron Lee was an absolute terror in the playoff stretch, it’d be extremely difficult to argue that he had a significantly greater impact than Striker did for Oklahoma. One of the main difference between these players was the surrounding talent and what it required or allowed from these players.

Lee played in a two-read defense at Ohio State that lined up coverage safety Vonn Bell behind him, an athletic talent that could play man or pick up verticals and allow Lee to stay in coverage underneath. Serving as the opposite edge terror in the Buckeye pass-rush was fellow freak Joey Bosa.

Meanwhile in Norman, Striker played opposite weak outside linebacker Geneo Grissom, who brought significantly less pass-rushing to the table than Bosa. Behind him was coverage safety Quentin Hayes, a solid player but certainly a lesser defensive back than Vonn Bell.

For the Buckeyes, blitzing Darron Lee off the field side was one of many valuable tools in their box for attacking the offense. They didn’t have to do it to get pressure on the quarterback and if they needed him to line up wide and manhandle someone’s perimeter screen game they could afford to do so.

Oklahoma could not afford to use Striker elsewhere, as their pass-rush without him was basically toothless. They needed him to either beat tackles on the edge or else blitz and demand attention. freeing up other pass-rushers to enjoy very favorable match-ups.

Perhaps the most limiting aspect for the Sooners was that they didn’t have great options in coverage with Striker on the strongside, other than to drop Hayes down over the slot and play Cover 3 with four or five rushers:

Oklahoma didn’t have the quality of defensive backs necessary to put their best pass-rusher in the nickel and regularly blitz him while asking the corners to play predictable coverage outside where they didn’t enjoy safety help. Converted nickel Julian Wilson was picked on mercilessly while veteran Zach Sanchez struggled with life playing opposite an overmatched player rather than 2014 first-team All-Big 12 selection Aaron Colvin.

In this coverage the boundary linebacker (“J” in this diagram) and strong safety (“$”) were unable to offer much help underneath for the corners and the Sooners couldn’t run complementary coverages to help them out without dropping Striker and losing their pass-rush.

While Striker really is a natural Sam linebacker like Lee, using him in that role put Oklahoma in a difficult position because it neither maximized his talent nor benefitted the rest of the defense.

The priority has to become ensuring that Striker’s usage sets up the rest of the team for success. His pass-rushing prowess can’t be used as a luxury out wide at Sam linebacker — it has to be a constant feature of the defense. For that reason, the OU spring game saw the Sooners ditch their 3-4 defense in favor of a more traditional 4-3 Over look:

Now Striker is a stand-up edge rusher playing next to a three-technique defensive tackle who can help him avoid double teams while former four-star safety Steven Parker is serving in the new OU nickel position, which lines up across from the most dangerous slot receiver.

This pre-snap look that OU regularly showed in its spring game should allow the Sooners to protect their secondary much more than the previous scheme, as it can easily become one of two different base defensive structures. The primary option is for the Sooners to stay in this two-deep shell and play two-read coverage with the nickel and outside linebacker serving as run-force players on the edge:

In this coverage they can either play their safeties aggressively and near the line of scrimmage (like Michigan State or Baylor) or deep depending on what their players can handle against a given opponent. They can also get help over the top for the corners depending on how they divide responsibilities.

Another base coverage Oklahoma can play from this same pre-snap look would be Cover 3 Buzz. To get into this coverage the Sooners would drop one of their big safeties, Hatari Byrd (6’1 206 pounds) or Ahmad Thomas (6’0 218 pounds), into the box to replace a linebacker in a Kam Chancellor-esque role, with the nickel and linebacker still serving as run-force players on the edge:

Teams often drop a safety over the second most threatening slot receiver rather than a linebacker, but by playing Cover 3 this way, the Sooners can pressure quick routes with the linebacker, double team dangerous tight ends with a linebacker and safety and create an eight-man front.

These coverages would allow Oklahoma to move its secondary around to shore up different areas of coverage, as well as to avoid asking its big and not overly fluid safeties to regularly cover slot receivers in man coverage as Hayes did in 2014.

Combining these two coverages was basically the exact strategy that Mike Stoops brought to the Sooners in 2012 when they finished 2nd in passing S&P, but struggled to stop the run. Iin 2015 they’ll presumably trust their outside linebackers in coverage more rather than substituting in a dime back every time opponents play with four receivers, a strategy that cost them dearly in 2012.

This style will help the rest of the defense and allow Striker to focus on getting after the quarterback, but it doesn’t show off everything the dynamic hybrid can do and will often require that he tangle with big blockers in the run game. He’s truly the ideal space-backer, but Oklahoma doesn’t have the luxury to use him in that role when they have a secondary that needs to be protected by a coverage player in the nickel and a strong, full-time pass rusher.

Great players have a multiplier effect on their teammates, but in a game of 11 on 11 they are still at the mercy of context. Eric Striker may have to play out of position in 2015 and still be great in order for Stoops’ Sooners to get back on track.