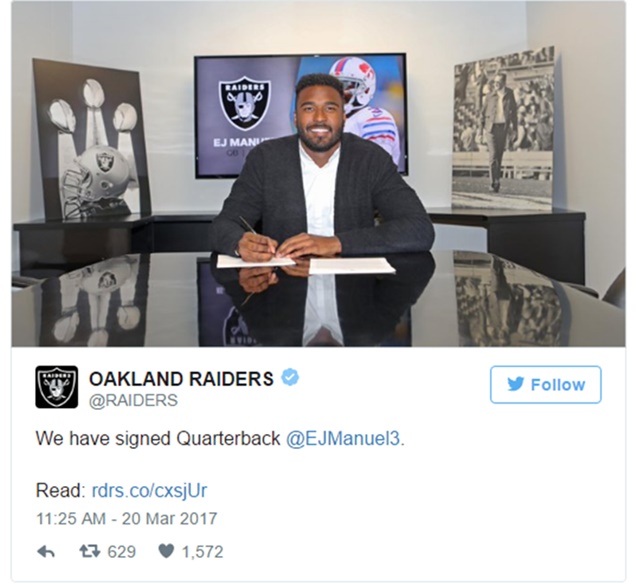 When it comes to Buffalo Bills quarterback EJ Manuel there was a reason that he decided to sign to The Oakland Raiders on Monday.

LatinoAthlete.com has the latest on why the former Buffalo Bills QB, EJ Manuel, who signed with the Oakland Raiders as of Monday.

Before you play the guessing game on why EJ Manuel felt that the Oakland Raiders was his team for 2017, we have the reason why he decided to go west. Manuel played in 10 games, passing for 1,972 yards, 11 touchdowns and threw nine interceptions for the Bills.

Now, he’s looking to move on with the Raiders and her is why. EJ Manuel says a big factor why he choose the Raiders was one factor, his decision was based on familiarity.

What was so familiar for EJ Manuel?

The element that influenced his decision was familiarity. Plus, the Raiders had a recognizable element that resonated with Manuel.It was his connection to Raiders offensive coordinator Todd Downing.

EJ Manuel Why He Decided to sign with The Raiders:

“We first worked together in the Senior Bowl. Just from those conversations when I was 21, obviously not knowing what to expect from the NFL and the opportunity that lay ahead of me, just having that trust and that kind of open mode of communication relationship relationship from him back then.”

Before Raiders head coach Jack Del Rio brought him aboard his staff, Downing spent one season as the quarterbacks coach with the Bills in 2014. He formed a closer relationship with Manuel during that season.

Manuel reflected on his relationship with Todd Downing:

“It was never really more so about football. It was more so just about me as a person. That’s something that is very rare in this business. I was extremely happy for him when he got the offensive coordinator position. When he did call once free agency began and told me that they were interested, for me it was a no-brainer. That’s a situation you want. Especially as a quarterback and in my situation, truing to really change the perception of whatever I’ve gone through in Buffalo and all that kind of stuff. I know the player I can be and so does Coach Downing. That’s what I’m excited about.”

EJ Manuel is gunning for the backup job behind Carr.

LatinoAthlete Staff - August 4, 2015
0
Few tears were shed for Rousimar Palhares on Tuesday, as the talented but troubled grappler was stripped of his World Series of Fighting welterweight...