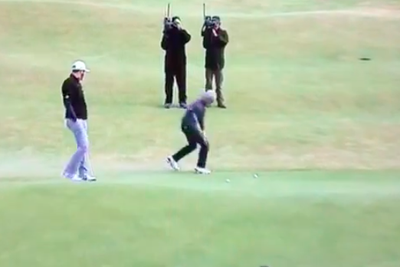 It’s getting wild Saturday morning at The Open Championship and our leader was immediately impacted.

The British Open has restarted at St. Andrews but we may not get very far. Players are repeatedly stepping off their ball up on the green, especially at the end of the course where it’s most exposed to the wind. It’s gusting at the Old Course and the players out in this 7 a.m. restart are just trying to hang on in what looks to be the toughest conditions of the week so far.

Dustin Johnson started his day at the 14th green needing a quick up-and-down for a birdie on one of the course’s only two par-5s. Instead, he walked off with a bogey thanks in part to a careless mistake. Just off the green, he decided to chip his ball instead of run it up there with a putter — probably not the wisest move for his first swing of the day in that wind. The ball would come up way short, settling just on top of a ridge in front of the green. He took his sweet time marking it and that wasn’t going to work in this wind — an awful mental mistake to make.

You can see Jordan Spieth come running in contemplating marking his ball before DJ’s rolled into his. Those two are getting a rough deal but they will need to adjust quickly. Johnson putted his next one up onto the green, and needed two more to get in the hole. It’s rare to have the longest, best driver in the world make a bogey on a par-5 but this is a different game right now. The bogey dropped him into a share of the lead with Danny Willett, who got into the clubhouse safe and sound early on Friday.

DJ’s troubles aren’t the worst of it out there either, as balls will not stay in place on the 11th green, one of the most exposed points of the course. Brooks Koepka had to repeatedly step off his ball and call in a rules official because it kept oscillating in the wind. That’s happening at different points on the course and we may get the horn for a delay again soon if it keeps up.

On top of the wind, it’s also freezing right now and looks miserable all around.

LatinoAthlete Staff - December 3, 2015
0
Oscar Pistorius’ earlier manslaughter verdict has been overturned by a South African appeals court who called the case "a human tragedy of...