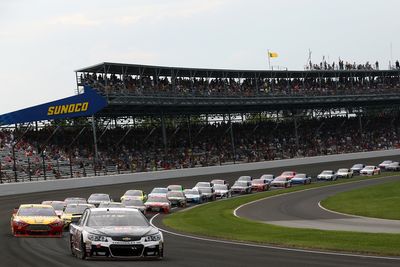 “It’s terrible,” Matt Kenseth said. “You just can’t pass. Yeah, you can run up on the straightaway a little bit, but you can’t run through the corner with anything.”

Although designed to induce passing and pack racing, which NASCAR officials have stated they want to see more of, Sunday’s event played out similarly to previous races at Indianapolis. When the field was tightened on restarts following caution periods, drivers would run side-by-side and jockey for position.

However, after a few green flag laps the field would string out, with passing usually only occurring during pit stops. As anticipated, drivers could close on the car in front of them but when they tried to pullout and pass, their momentum stalled. Because of the large wake the package generated, cars become excessively turbulent.

“It was terrible,” Kyle Larson said. “It was really bad. There was lots of grip by yourself and then as soon as you get within like five car lengths of the guy in front of you, it’s no grip. So, I don’t know. Restarts are intense. But, other than that, it’s pretty bad.”

A low downforce package consisting of a greatly reduced spoiler was contested two weeks ago at Kentucky Speedway and met with resounding praise by drivers, who had long asked NASCAR for such a package.

The standard rules package introduced prior to the season was ran last week and will return for next Sunday’s race at Pocono Raceway. The high-drag package will also run Aug. 16 at Michigan International Speedway.

“I think everybody put in a lot of effort to really try to make everything a lot better, spent a lot of money, but I don’t know that we accomplished everything that we were looking to accomplish,” Harvick said. “But everybody tried real hard, and in the end, I think our ‑‑ our goal is more drafting and more pack racing, so we’ll see if we can get to that.”

A side effect of Sunday’s rules package was how excessively hot it got within the cockpit, with many drivers saying the heat was oppressive. Logano said he suffered a blister. The issue stemmed from a blocked rear bumper extension that sealed the bottom of the car and trapped hot air.

“I’m still sweating like crazy,” Logano said. “I’ve got sweat in my eyes … It’s just too hot inside those cars.”

Also problematic was a nine-inch spoiler — six inches higher than the Kentucky package and three inches taller than the standard package. The heightened blade limited visibility, especially on restarts where drivers struggled to see their marks.

So which aerodynamic package would drivers like to see going forward? Denny Hamlin left no doubt what he preferred.

“We needed to try something different and it was an experiment,” Hamlin said. “I just prefer the other. I think this makes too big of a wake for the car.”

LatinoAthlete Staff - July 29, 2015
0
Athletes were given an unforgettable moment at the Special Olympics World Games in Los Angeles when they were joined by celebrities for...