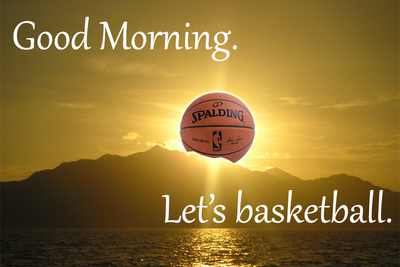 Good morning. We have more bad jokes like that one in the headline in Wednesday’s NBA newsletter.

YES: Becky Hammon should be a candidate for future NBA head coach openings.

EXPANSION TODAY. EXPANSION TOMORROW. EXPANSION FOREVER! That’s not just a thesis on the infinite growth of the universe. It’s also how I feel about Mark Cuban’s 20-team playoff field idea.

GALLO GETS PAID: The Nuggets used their cap space to lock in Danilo Gallinari to a three-year deal that gives him a raise this season. If he gets healthy, it’s a good deal for Denver.

CONFESSIONAL: DeAndre Jordan explains why he eventually chose the Clippers and discusses his relationship with Chris Paul. Also, Blake Griffin wrote about being holed up in Jordan’s house that infamous night of The DeCommitment.

RIP-OFF: Richard Jefferson retracts his commitment to the Mavericks and signs a 1-year deal with the Cavaliers. One more Dallas backtrack and it’s officially eligible for a trend piece in the New York Times Styles section …

UNTYED: Josh Kroenke on why the Nuggets needed to trade Ty Lawson. Also, I really enjoyed Jonathan Tjarks on the Rockets’ rather surprising new depth.

BEAUTIFUL: A rich piece from the Wall Street Journal on Brooklyn’s best and worst basketball courts.

DOPE NAME, TOO: Malik Monk is more than a mixtape legend.

HI7ARIOUS: Carmelo Anthony introduced himself to Kristaps Porzingis in a text by saying “This is Me7o.” Yes. Yes it certainly is.

STARTED FROM THE BOTTOM: How Dennis Smith Jr., a class of 2016 point guard, has risen up the rankings so fast.

THE NEXT BIG SLEEPER: Kevin O’Connor hands that title to Michael Frazier, a Florida product who hasn’t yet signed a preseason deal with a team.

THE TOBIAS QUESTION: Zach Lowe digs deep on an important analytic issue: how do we rate players like Tobias Harris, who put up good numbers on bad teams?

BIG ARISTOTLE FOR REAL: Karem Abdul-Jabbar is as comfortable as ever as a public intellectual.

IT’S ON NOW: The Kangz signed Seth Curry to a guaranteed deal out from under the Pelicans, setting up an eternal I-80 War between Dell and Sonia’s Boys. I enjoyed James Herbert’s piece on Curry on the cusp last week.

NEAT: The Pacers are going to wear Hickory High jerseys inspired by Hoosiers. Can I make a surprising admission? I’ve never watched Hoosiers.

NEAT PART II: You’ll be able to play as real college teams in NBA 2K16 … just not with any recognizable current players.

LEGRANNY: This 89-year-old LeBron superfan wanted some LeBrons for her birthday and got them.

Happy Wednesday. See you next time.

Get news, links and Ziller’s #hottakes in your inbox every weekday morning.

LatinoAthlete Staff - June 9, 2015
0
The Chicago Blackhawks have dropped consecutive one-goal games to the Tampa Bay Lightning in the Stanley Cup Final, and they had the lead in...