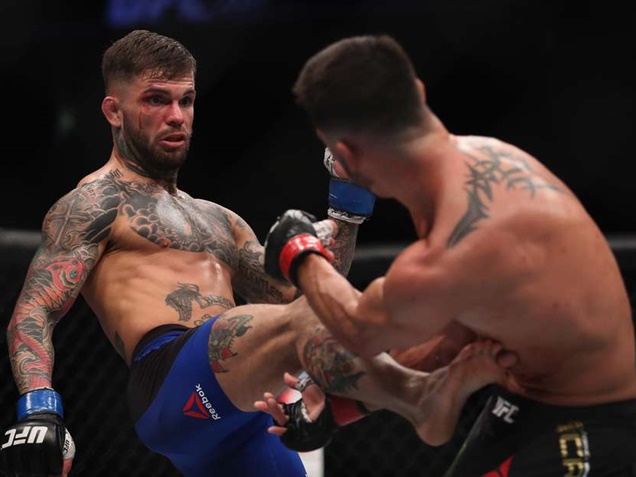 We previously reported that Cody Garbrandt was crowned the new UFC champion, and now he’s talking about Dominick Cruz performance.

Garbrandt says that he appreciated the fight he brought to the cage, but he was only toying with Dominick. Read more on Cody Garbrandt weighing in on Dominick Cruz…

Cody Garbrandt was heard boasting that he could’ve knocked Dominick Cruz out “multiple times” at UFC 207.

A very confident Garbrandt went on to tell TMZ that he pinpointed the moment he knew he had the fight locked. He was having so much time “toying” with him, he says stretched the fight against Cruz to the 5th. And get this, Cody Garbrandt says he mocked Cruz “for fun.”

Damn, that must bite if you’re Dominick Cruz. Then, Cody says that he had a great time beating Cruz.

Per reports a second fight between Garbrandt vs Cruz is in the works, but Cody says:

See what he said to TMZ on FS1:

Why Dominick Cruz got suspended:

In additional news, former UFC bantamweight champion Dominick Cruz has been suspended following his loss at the UFC 207. Despite Cody Garbrandt domination, Cruz got in enough shots to receive a 30-day suspension.

Even Garbrandt was suspended until Jan. 30 with no contact until Jan. 21.

The Fantasy War Room is LIVE!

LatinoAthlete Staff - August 28, 2015
0
The SB Nation Fantasy War Room is back! The SB Nation fantasy football draft guide is live, and with it comes our...