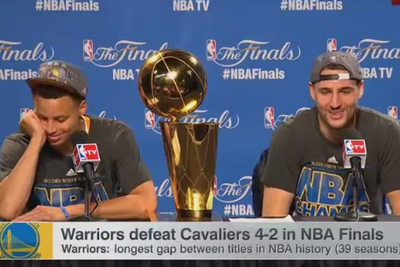 LeBron James wasn’t able to bring the NBA title to Cleveland, but he did cement his place as the best basketball player in the world by averaging 35.8 points, 13.3 rebounds and 8.8 assists per game in the Finals. He knows he’s the best player and even admitted as much during a post game press conference following Game 5.

Klay Thompson did come out on the winning side of things and possibly included a not-so-subtle shot at James as part of his celebration. While sitting next to Stephen Curry and the Larry O’Brien Trophy, Thompson said, “It just feels good to say we’re the best team in the world with the best player [in] the world.”

Is he taking a shot at James and his claim? Maybe. He could also just be giving credit to his fellow Splash Brother who does happen to be the reigning NBA MVP. Either way, Thompson and the Warriors got the last laugh this season.

LatinoAthlete Staff - June 26, 2015
0
Brian Stann's list of accomplishments impresses even the harshest critics.  From his well-documented military career to his run as the World Extreme Cagefighting (WEC) light...