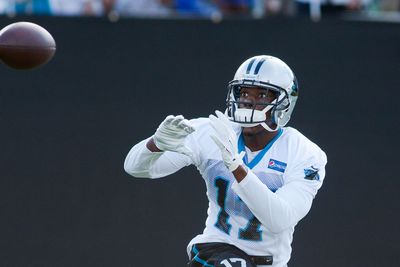 Fantasy owners will have to wait to see what Devin Funchess can do.

Carolina Panthers receiver Devin Funchess (hamstring) will not play against the New England Patriots on Friday. The rookie receiver has been dealing with a hamstring tweak for one week, but it is not considered serious.

He is fully expected to be the top option at receiver for the Panthers. Receiver Kelvin Benjamin tore his ACL this month and it’s left the Panthers decimated on the outside. The team hasn’t officially named Funchess the starting split end, but it would be a shock for him not to win that job.

ESPN’s David Newton said Funchess “should get a lot of looks in the red zone” this season. Tight end Greg Olsen will likely be the top red zone option, but Funchess is a good bet to be No. 2 after him. Of course, it’s worth a mention that quarterback Cam Newton is capable of scoring on his own.

Funchess has seen his average draft position rise to just underneath pick 100, which is to be expected. The eye test will say he is a No. 1 option, so that’s definitely a fair place to target him. Fantasy owners probably shouldn’t reach higher than 85 because the Panthers don’t look to be a very strong passing offense.

LatinoAthlete Staff - July 24, 2015
0
WWE has parted ways with one of their best-known stars. On Friday, Hulk Hogan was removed from WWE television and WWE.com and...